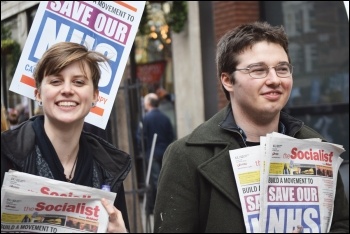 In Stoke we use our famous 'boards' which use slogans to attract people to our campaign stall. We invite people over to sign our petition which frequently results in someone buying a copy of the Socialist, something we ask everyone to do.

It's very obvious that members enjoy being on the frontline meeting people and discussing socialist ideas.

It's brilliant to see new members growing in confidence. We have found over the months we have built up regulars who turn up in the areas we campaign in on a regular basis - we are on first name terms with many of them.

This has resulted in recruiting new members to the Socialist Party at the stall.

People are amazingly generous, especially when you consider Stoke is an area where the manufacturing industry has been destroyed over the last 30 years, first the pits, then the pottery and steel industry.

Which is why a lot of local people are looking for a party which will fight for a decent future for all.