A two-day sit-in by 500 workers at the Hinkley Point C nuclear power station in Somerset won the workers' demand for pay. Bosses had threatened to dock pay for not attending work when the site was closed due to heavy snowfall.

When employees returned to the site on 6 March they were told they would not be paid for the days they were off.

The workers' unions GMB, Unite and Prospect have announced the project is back underway after the 'Beast from the East' sit-in protest which halted work for four days.

The battle against academies is continuing in Newham, with a lively picket at Avenue Primary School on 13 March. Avenue will take six days of strikes over the next fortnight, with other schools in the borough coordinating action.

Campaigners recently lobbied a full council meeting, and won a vote for the council to take an anti-academies position. This is welcomed.

But the motion made no provision for schools currently attempting to convert to academies, so the strikes continue. 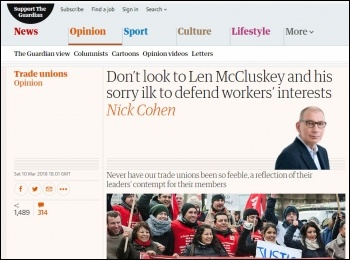 In his diatribe against Len McCluskey and his leadership of Unite the Union, Nick Cohen in the Observer (11 March) contrasts Unite's 'poor' record with Usdaw the shop workers' union.

On the contrary, they don't! Contrast Usdaw's current position on the Sainsbury's deal with Unite's. That is why members elected Socialist Party (formerly Militant) member Amy Murphy as president last month so that Usdaw does fight those battles.