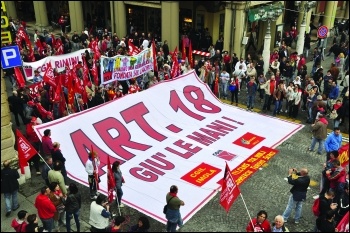 The building of an anti-capitalist alternative through working class struggle is a key task for the left, photo SpiGgil Emilia-Romagna/CC   (Click to enlarge)

The 4 March general election has caused the biggest shake-up of the Italian political landscape in over 20 years. Not since the 'clean hands' corruption scandal of the early 1990s have the establishment parties been so severely wounded, writes Christine Thomas of Resistenze Internazionali (CWI Italy).

On a turnout of 73%, over 50% of votes went to perceived anti-establishment parties, reflecting a clear rejection of traditional politics and a desperate desire for change after years of corruption, austerity and economic devastation for ordinary people.

With no clear victor, weeks and possibly months of uncertainty are likely as parties struggle to form a viable government.

The collapse in the vote for the PD, the main party in the outgoing coalition and favourite of the Italian capitalist class, was even greater than the polls had predicted.

In the Camera (lower house) the PD on 19% was only just ahead of the Lega, a far cry from the 40% polled in the European elections less than four years ago. Even its dominance of the 'red regions' (former Communist Party strongholds) in the centre has been shattered, with the PD losing the Emilia Romagna region to the 'centre'-right for the first time since World War Two and holding on in just a few cities like Bologna and Imola.

Following such a crushing defeat nationally, Renzi has been forced to announce his resignation as leader (although it will happen only after a new government is in place).

Even though there has been a slight upturn in the economy, after nearly a decade of recession, the PD was never going to benefit from an economic electoral bounce. Growth is still lower and unemployment higher than before the crisis and most working class people and many middle class people have felt no improvement in their daily lives. For many there is no end to the crisis.

During the election campaign, Embraco (part of Whirlpool) announced the transfer of production from Turin to Slovakia with the loss of 500 jobs.

The split-off from the PD, Liberi e Uguali (LeU), which was supposed to offer a new "left" alternative, only just reached the 3% threshold for having candidates elected.

This is not surprising when its leaders are associated with all the PD's anti-working class attacks - such as the labour law 'reform' which made it easier to sack workers and the pension 'reform' which has forced workers to work longer.

On the eve of the election, Pietro Grasso, leader of LeU, showed his party's true colours by announcing LeU's willingness to form a post-electoral coalition with the PD.

With over 32% of the vote nationally, the M5S is by far the biggest party. It swept the board in the south, which has been hardest hit by the economic crisis, getting 40% of the vote in Puglia and Sicily and over 50% in some parts of Campania, such as Naples. M5S did particularly well among young people (35% of the under 35s who voted).

The support for M5S has come from both former left-leaning and right-leaning voters who, thoroughly sick of traditional politics, have been prepared to overlook the party's internal problems and chaotic governance of Rome in order to 'try something different'.

However, despite its success the M5S will not be able to form a majority government on its own. Terrified of the possibility of a M5S government, the Italian ruling class had pushed for a change in the electoral law aimed precisely at denying the movement a majority. Now that same electoral law has resulted in the ruling class having no stable political reference point.

Luigi Di Maio, leader of the M5S, has spent the past few months courting big business and trying to present himself as a viable future prime minister and the M5S as a reliable capitalist party, including backing away from the movement's former anti-euro/EU stance and opposing a wealth tax.

He has also declared that he is open to the idea of alliances with other parties. How far he will be able to go along that road is an open question as it flies in the face of the original raison d'etre of the M5S - a movement forged in complete opposition to the rotten political 'caste' and traditional parties.

If the M5S should decide to go into a coalition with any of the other parties it would most likely result in the movement shattering, with one part attempting to move back to its anti-establishment origins.

The 'centre'-right has emerged as the biggest coalition but, with 37% of the vote, it is also short of a majority. The significant change is that the virulently anti-immigrant Lega is now the biggest party on the right, overturning the balance of forces within the coalition away from Berlusconi's Forza Italia.

In the media, the question of immigration dominated the electoral campaign with all the major parties adopting a hardline position. But in the north, and increasingly in parts of the centre, it has been the Lega which has reaped the electoral benefits.

Its vote increased nationally from 4% at the last election to 18% this time (a third of those voters having previously abstained and a quarter switching from Berlusconi's party). Also, Fratelli d'Italia, which is part of the coalition and has its roots in the fascist party MSI, tripled its vote to 4.35%.

The 'centre'-right will undoubtedly attempt to win over MPs from other parties in order to form a majority. But it will be extremely difficult to find the necessary numbers (over 50 seats), especially with Salvini as the candidate for prime minister.

Despite the anti-immigration political discourse and unprecedented media publicity for the fascist Casapound, it only managed to get 0.9% of the vote. However, the shooting of six immigrants by a right-wing terrorist in the course of the election campaign showed the dangers that anti-immigrant politics are fuelling. The question of anti-racism and anti-fascism will continue to be a central one, whichever government emerges.

'Power to the People'

The newly established left-wing Potere al Popolo (Power to the People) failed to reach the 3% threshold for parliamentary representation. It got 370,000 votes, just over 1% nationally (compared with 3% in 2013 for the 'radical' left forces). This was in part as a consequence of the 'useful vote' mood which prevailed, affecting all the smaller lists.

For a movement formed only a few weeks before the election and without the media coverage given to the other parties (including Casapound), getting candidates elected was never the main aim.

Potere al Popolo was formed from below as a fighting, campaigning organisation of and for ordinary people, uniting the main left parties and social movements in the country. Hundreds of meetings held in over 100 cities up and down the country attracted thousands of people, especially youth.

It was because of the potential that Potere al Popolo represents for building a fighting anti-capitalist force that Resistenze Internazionali (CWI Italy) affiliated to it, participated in its electoral campaign and stood a candidate on its list in Genova. Whether this organisation will realise its potential is not certain but we will continue in the next period to play a role at a local and national level.

At this early stage it is impossible to say what kind of government (if any) will result from this election - a 'centre'-right coalition dominated by the Lega, a M5S/PD coalition, an alliance between the M5S and the Lega, an extended 'grand coalition', a technocratic government, a government of the president with the sole aim of changing (yet again) the electoral law, or maybe new elections.

All are possible outcomes, but what is certain is that none will be able to solve any of the problems facing working and middle class people.

Italian capitalism's economic, political and social crisis will continue and the building of an anti-capitalist alternative through struggle is now more vital than ever.