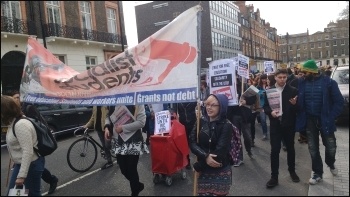 University and College Union (UCU) members at 64 universities have completed a historic 14-day programme of strike action in defence of pensions.

This is the first phase of our industrial action. If Universities UK (UUK) does not agree a deal which protects our current 'defined benefit' pensions there will be further strikes after the Easter break.

In the course of this strike, not only have the turnout thresholds for national industrial action set out in the Trade Union Act been well and truly beaten, but we have collectively taken more strike days than were taken either in 2015 or 2016 across all sectors!

The energy and power of the strike has been electric. It has forced local university managements all over the country to reverse their position and plead with UUK for a deal that will satisfy the strikers.

Even more impressively, members have not only mobilised against the employer's attack on pensions, but also against the union leadership's attempt to demobilise the strike following concessions.

When the leadership of UCU chose to issue a statement outlining an "agreement" with UUK, suggesting strikes would be called off that teaching rescheduled, the reaction from members on social media was one of visceral rage.

Within less than 24 hours, all but two of the branches on strike had organised emergency meetings and voted to reject the deal.

Well over a thousand demonstrated outside the UCU national office as the union's higher education committee met to discuss the offer.

This mobilisation of rank-and-file members forced the leadership to drop the plan to suspend strikes and reschedule classes.

In the past, UCU's leadership would have succeeded in demobilising the struggle - but not anymore.

Social media, and Twitter in particular, has been a hugely important tool in this dispute. It has allowed members to discuss the way forward in a way that has largely not been possible within the somewhat empty structures of the union nationally.

But social media is not a substitute for a fighting, democratic and member-led union - the energy and militancy of the strikers must be channelled into transforming UCU.

Members in every branch affected by the dispute are understandably incensed by the lack of leadership shown by Sally Hunt and other full-time officials.

The best way to begin to address that problem would be for UCU branches to demand a national strike committee made up of branch delegates to assume control of the dispute from now on.

Between now and the next phase of industrial action we will be working to contract and refusing to reschedule teaching activity.

But we cannot allow the momentum to dissipate. At nine institutions, management is still threatening punitive pay deductions against members taking action short of a strike by refusing to reschedule teaching.

A call for academic boycott of these institutions has been put forward, although not by UCU officially - you can read more about it here. But this alone is not enough.

Not just UCU but the whole of the trade union movement should put these universities - Aberdeen, Bradford, Bristol, Brunel, City, Leeds, Liverpool, Salford and Surrey - under immense pressure to ensure these threats are withdrawn.

This has already been achieved at several universities, including my own, Sheffield. The Trade Union Congress (TUC) - of which Sally Hunt is currently president! - has been invisible during this dispute.

This is a great opportunity for the TUC to finally show some leadership and coordinate labour movement pressure on these institutions. If it doesn't, union leaders should waste no time in organising together anyway.

UCU members have engaged in a fantastic struggle - not just against the employers, but against our own union leadership when it attempted to demobilise the strikes for a few temporary concessions. But the fight to save our pensions continues.

Hundreds of students and lecturers from universities across the country gathered at the University of Sussex on 15 March, for a national demonstration organised by local students, including Socialist Students.

Billed as 'Break UUK, win the strike!' the crowd marched through campus to chants of "students and workers, unite and fight" and "UUK pay attention, staff deserve a decent pension".

Over the past weeks of strike action, various students and staff have expressed their solidarity for their lecturers as they continue to fight against UUK's proposed changes to the pension scheme, which could see lecturers losing up to 40% of their pensions.

The crowd erupted with cheers as it passed Balfour Beatty's construction site on campus, where roughly 19 students went into occupation to protest the pension cuts, as well as for Unite the Union access to the site to prevent blacklisting and to organise workers.

Other students joined the occupation as the crowd passed, bringing the number of students on the site to over a hundred! The construction of new, unaffordable halls while the existing ones lie in disrepair demonstrates how the ongoing process of marketisation has affected students as well as lecturers.

The manifesto demands rent controls and democratic reform in the structure of universities as a step towards preventing the constant attacks on higher education.

We have been by our lecturers' side on the picket line every morning showing student solidarity against the pension cuts.

We have seen what unity in power means and how important it is to keep the momentum going. We reject in any way possible these decisions affecting our university!

It is a disgrace to see UUK attack and destroy the education system.

We are not here as enemies of education. We are here to defend it! It is our responsibility as students to have a say in what the university decides. We are not blind consumers of education.

Close to 100 strikers again picketed Glasgow University on 14 March. Student supporters are 'hard picketing' which involves blocking the main gate to any lecturers who are breaking the strike - a minority.

The Socialist (Scotland) spoke to Jeanette Findley, branch chair of the UCU: "The mood today is even more determined after we told the negotiators what we thought of the offer.

"I don't personally want any changes to the pension scheme and if we are serious and fight hard enough we can force them back I think. 150 new members have joined here since the action."