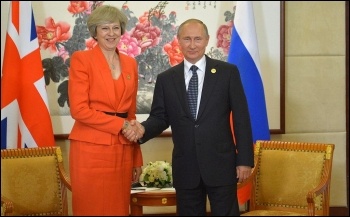 Unsurprisingly, Vladimir Putin was reelected on 18 March as Russia's president.

Given the lack of any credible opposition, the result was never in doubt - only the turnout was important to the autocrat Putin, who wanted 70%. In the event, after pressuring state employees and offering the public a range of 'incentives', it was 67%.

The western media and liberal opposition cried foul but there was probably less election fraud this time compared to the last election.

The courts having conveniently barred the nationalist Alexei Navalny (who called for a boycott) and with the assassination of Boris Nemtsov outside the Kremlin three years ago, the nearest opposition candidate with 12% was the Communist-backed agrobusinessman Pavel Grudinin.

He lost four million votes compared to last time, having alienated a section of the Communist Party's older soviet nostalgic electorate while doing nothing to inspire - with his racist attitudes and support for Stalin - the younger, increasingly rebellious generation. The CP's complaints about oligarchs and foreign influences were undermined when Grudinin's 13 or so Swiss bank accounts were exposed!

Socialist Alternative (CWI, Russia) has not succumbed to despair, but is determined to continue its campaigning on issues such as 300 rubles an hour for those in work, against the harassment of women and the attacks on LGBT+ people. In this way it is building a vibrant and democratic socialist organisation capable of offering an alternative to the capitalist authoritarianism currently gripping Russia.

What has brought Russians onto the street in recent days is not the tussle between Putin and the West over the Skripal spy poisoning saga but the fatal shopping mall fire in Kemerovo, Siberia. Hundreds of protesters demanded the sacking of officials for safety negligence.

Draconian sentences for Pussy Riot protest will backfire on Putin