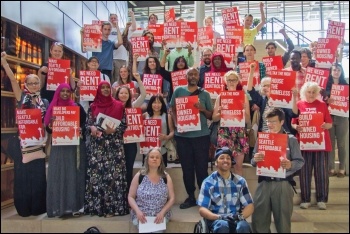 Ty Moore, Socialist Alternative (US co-thinkers of the Socialist Party)

Seattle's socialist city council member Kshama Sawant is facing two defamation lawsuits, the aim of which is to silence an outstanding representative of working people and the oppressed.

The first is from two police officers who shot and killed a black man in 2016. The other is from a landlord notorious for his tenants' complaints about conditions.

A broad-based independent defence campaign is being prepared.

These lawsuits are part of a wider effort from a section of the establishment and the right wing to silence and criminalise dissent. The Trump administration has also made clear its sympathy with these efforts.

In February 2016, two policemen shot Che Taylor in north eastern Seattle. A widely circulated police dash-cam video of the incident appears to show Taylor's hands in the air and moving to the ground, in compliance with officer commands, when he was shot at point-blank range.

The police claimed Taylor was turning to pull a gun out of a holster as he got out of the car but they have refused to release additional video they have of the "death scene". Taylor was hit by four of the seven bullets fired and died of his wounds.

No weapon was found on the victim. A weapon was later reported to be in the car, though even the official inquest found he was attempting to follow orders, putting his hands in the air, when he was shot.

However, the official inquest jury did not result in a decision to prosecute the police. One of officers, Spaulding, has now killed two people, the other victim being a mentally ill Native American killed during a domestic dispute.

Kshama Sawant, speaking at a protest outside city hall, called the shooting a "brutal murder." In a brazen attempt to intimidate Sawant and all those challenging police violence in the black community, these two policemen then filed a defamation lawsuit against Sawant.

A defamation suit can cost hundreds of thousands in legal fees - clearly beyond the pay of the average Seattle police officer. Many speculate that the officers' lawsuit is being secretly bankrolled by a group or individual looking to silence Kshama and Black Lives Matter.

Kshama has a long record of speaking out against violence by the Seattle Police Department. This lawsuit seeks to silence her - with a potentially tough council re-election battle shaping up next year - and to send a warning shot to other prominent voices who might speak up against police killings of black people.

Meanwhile, Seattle landlord Carl Haglund has also launched a lawsuit accusing Kshama of defamation for calling him a "slumlord".

In 2015, Kshama and tenant activists scored an important victory in forcing Haglund to back down from major rent hikes at one of his apartment buildings, which was infested with mould, roaches, and rats among other code violations.

Council members Sawant and Nick Licata then successfully passed an ordinance to outlaw rent hikes in Seattle for housing units with code violations. Haglund's lawsuit is a clear case of sour grapes.

The attitude of the establishment toward Kshama on this issue is exemplified by the Seattle Times which has failed to expose the racism and abuses by the Seattle police. Yet, they have had four op-ed articles criticising Sawant's objections to the way the police treat black and Latino people.

Not surprisingly, the paper vehemently opposed Kshama's candidacy in 2013 and 2015.

Police violence is not only directed against black people, but also immigrants, social activists, and labour activists. We need a broad defence campaign to bring these injustices to light and to help publicise other cases of police violence.