NEU conference: Teachers vote to ballot over pay and workload 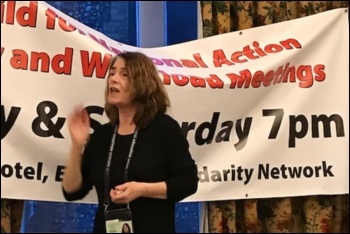 The National Education Union (NEU) conference (NUT section - the last ever before fully merged conference next year) took place in Brighton against the backdrop of a perfect storm building in our schools.

A teacher recruitment and retention crisis as a result of unsustainable workload is being compounded by massive cuts to school budgets. Major concerns about students' mental health, due in large part to the exam factory nature of our schools, have hit the headlines. There are serious questions about the strategy of our union leadership in beating back Tory attacks on education.

Where are we going?

The Socialist Party bulletin was aptly headlined 'Where are we going?' and the major test on this question was going to be over national strike action. Socialist Party members co-wrote and moved the key amendment to the motion on pay, which would commit the union to a ballot for national action in the new academic year on three key demands: 5% pay rise, a limit on teacher working hours and an end to performance-related pay.

The amendment was passed overwhelmingly with no-one speaking against. The hard work begins now to ensure the leadership follow through on this and we methodically build to meet the new ballot thresholds. The upcoming executive elections will be an important opportunity to thrash out a strategy to win and commit national executive committee members to it.

While there was a unified conference hall on the pay amendment, many fiery debates erupted during the weekend, showing the anger many delegates harbour, including over the representation of supply teachers on the new executive and the arrangements for conference next year.

It was on primary school testing that one of the other major debates was fought. The admission in the discussion that the executive had failed to carry out last year's policy to conduct a consultative ballot of primary members to boycott Sats, tests for seven and eleven-year-olds, set the scene.

Anger at a Groundhog Day-type scenario bubbled up to the surface. A motion to boycott a new pilot scheme of baseline tests for four-year-olds meant a proposal to boycott all primary tests was ruled out of order by the chair. The close vote on the original motion, only narrowly won, suggested an appetite to go much further and advance a bold programme of action.

Conference and fringe meetings also heard from strikers and parents at Avenue Primary, Newham. The NEU group there is engaged in a fight against academisation with Socialist Party member and Newham NEU secretary Louise Cuffaro leading the action.

Conference also discussed many international issues, organising young teachers, pedagogy and the curriculum, sexism in schools, Ofsted, the hijab and many other issues.