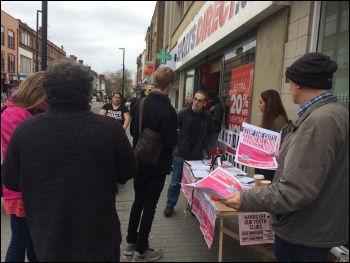 Hounslow's Labour-led council has recently decided to chop a further £27.4 million from the 2018-19 budget including slashing all funding for youth clubs, meaning they will close in the next few months.

Trade Unionist and Socialist Coalition (TUSC) supporters have found so much anger over this that we have made it a key campaigning point for our candidates in the local elections.

We are the only campaigners pointing out all the facts to the electorate, and many are horrified when they hear them.

They mention all the headlines in the media about increasing youth violence and knife crimes in London and elsewhere.

Also youth workers have approached our stall and promised support. It takes a lot of effort to break through the alienation and lack of interest on the doorsteps in local elections created by years of Labour carrying out Tory policies.

In Hounslow this has resulted in 45% of children living with out-of-work parents or in low-income households.

Over 2,700 people are in temporary accommodation and the poorest residents have to spend over 60% of their income on uncontrolled rents with a huge shortage of council housing.

One in four residents are low-paid and universal credit has increased the risk of evictions.

The TUSC campaign is raising the consciousness of locals with the youthful, enthusiastic energy of our candidate Sukh Sethi on her first campaign and the experience of our other candidate John Viner, a Unison shop steward and a long-time Socialist Party member.