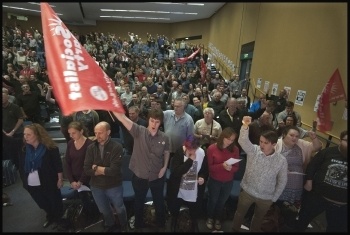 As regular readers of the Socialist will know, the Socialist Party is currently under threat of eviction from our national headquarters. We have had a presence in London since the early 1960s and have been at our current premises for over 17 years.

We believe that it is essential that our HQ remains based in the capital city, therefore we have launched a building appeal to secure a new premises.

We do not have any rich backers. Our branches are based in working-class communities, among workers, students and young people who have been hammered by austerity, debt and low pay.

But our members and supporters have been prepared to make a sacrifice to ensure that we have the funds we need, with many paying a week's income or more to the appeal.

A single parent of two living on continually squeezed benefits has pledged £100 and is donating a proportion from the sale of his car. A new 12-year-old member has pledged a whole week's pocket money of £5!

Together we have already smashed through £150,000 in pledges; an enormous achievement but we believe there is the potential to go beyond that. We are looking for a building to buy or rent in London, where rents are high; and large enough properties to buy are over a million pounds. Every penny and pound is needed.

We've had some big one-off donations of £10,000 and £5,000 from savings and windfalls, but also a large number of smaller donations.

Your donation, however big or small, will make a difference. Be part of something bigger - donate to the Socialist Party building fund and know that you're part of fighting for a better world.