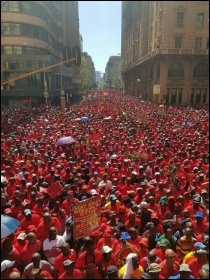 The ANC government is pushing through a new Labour Relations Act that will do away with a show of hands to start a strike. It introduces secret strike ballots and strike notices to employers. New picketing rules will require the boss to agree about picket line rules (which they never will), and an unelected commissioner to enforce these. And worst of all strike settlements will be imposed on workers. The Saftu trade union federation organised a strike against these attacks on 25 April. The Workers and Socialist Party (WASP) played an important role in campaigning for the action to go ahead. WASP member Mametlwe Sebei spoke at the enormous strike rally.

Tens of thousands attended another mass feminist demo in Madrid on 4 May. They were protesting the light sentencing of 'La Manada' - five men accused of raping an 18-year-old woman during the Pamplona bull-running festival two years ago - see socialistparty.org.uk 'Spain: "We don't want to be brave, we want to be free!"'. Izquierda Revolucionaria (IR) and Libres y Combativas (the feminist campaign of the students' union and IR) were out in force. There was a lot of rage against the sexist corrupt system. The students' union has called a student strike for 10 May. 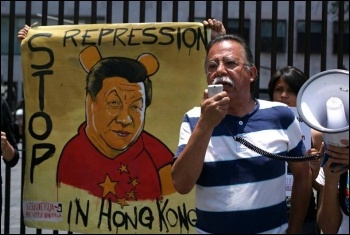 20 countries, including the UK, hosted solidarity actions demanding an end to political repression in Hong Kong on 4 May. The Xi Jingping dictatorship is ramping up repression. Leung Kwok-hung, 'Long Hair', has been undemocratically disqualified from the Hong Kong legislature. He faces jail on completely fabricated charges.