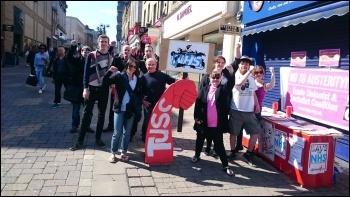 In Huddersfield, with little time and scant resources, we chalked up almost 1,000 votes between us. Nicola Jackson canvassed and leafleted as if her life depended on it. With a strong local following, she chalked up a respectable 6.5% of the vote.

In Crosland Moor and Netherton, many local Labour Party members openly backed our candidate, Mike Forster, who is strongly involved in the campaign to save the local hospital. Mike won 700 votes. A clear message has now been posted to Labour councillors: stand up to the cuts, or face stronger opposition next time.