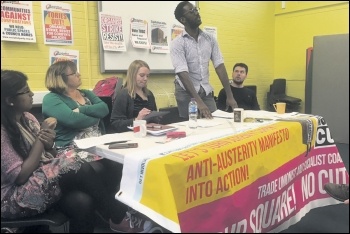 It is a condemnation of these Blairites that there were life-long Labour voters considering voting Tory to punish them. TUSC stood 17 candidates to offer a socialist expression of this opposition to gentrification and austerity.

Nancy Taaffe stood against the leader of the council and got an increased vote. In fact, overall our per-candidate vote was slightly up on 2014 in the last London local elections.

Significantly it increased the most in the wards around the town square where we play a leading role in the campaign against the building of monster blocks of unaffordable flats on public space and trees.

As Nancy commented: "It looks like many people just chose to stay away to express their disgust at things.

"Let's see if this current crop of councillors look at the poor turnout and see it as a lesson that they can't just do what they want to us or whether they press ahead with the monster block, as well an intensification of austerity and all that that means for us.

"We will keep fighting the monster block and we call on the new planning committee to consider blocking full planning permission. We will be lobbying the first meeting of the new council on 24 May."