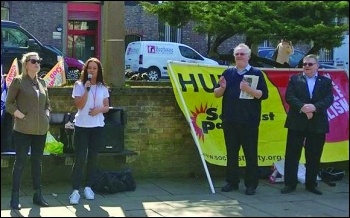 On 12 May striking lecturers and students from Hull College will be demonstrating together with the wider labour and trade union movement in Hull against the proposed axing of up to 400 jobs across the college. Further attacks on the pay, terms and conditions of support staff are expected.

Staff, students and the wider community will not accept management's so-called 'Fresh Start' rescue plan, which includes £10 million worth of cuts.

At a time that vicious cuts are being proposed, management seems to have pots of money to pay for consultants to 'manage' the process. Rumours are rife about possible vested interests lying behind some of the proposals.

Already, the University and College Union has organised two days of strike action and declared a vote of no confidence in the management of the college. Unison union is also balloting its members. Hull trades union council has demanded that college management open the financial books so that staff and students can see the true situation.

Despite management intimidation of students and staff, there is a growing determination to stop the cuts package. The more clumsy management are in trying to stop opposition to their proposals, the more confident union members are that management is rattled.

The attacks, particularly on art and creative subjects, make a mockery of Hull's Year of Culture in 2017. People are asking why last year art was promoted but this year it is under attack?

The college stands as a monument to failed corporate mismanagement and government cuts. The trades council has made a clear call for the cancellation of the cuts and for the proper funding of the further education sector. However, a central demand of the campaign is to bring the college back into public ownership, where it can be run democratically in the interest of the community as a whole.