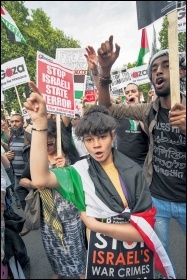 Protesting in London against the Israeli state's slaughter of Palestinians, photo by Paul Mattsson   (Click to enlarge)

The Gaza Strip in recent weeks has seen one of the most important waves of Palestinian protests against the ongoing brutal siege enforced by Israel, in collaboration with Egypt, with unbearable consequences for living conditions.

The protests, which have attracted many thousands week after week, have been met with extreme lethal repression by the Israeli government. At the time of writing, over 100 demonstrators have been killed and 10,000 injured as the Israeli capitalist government strives to prevent a mass movement at all costs.

Socialist Struggle Movement (CWI Israel/Palestine), which is in full solidarity with the protests, spoke to 24-year-old Gaza activist Ahmed A-Na'ouq from Deir al-Balah city in the Gaza Strip, about the bloody repression, the devastating conditions and the protest movement.

At one of the first demonstrations Ahmed describes the scene: "That was horrific. I saw protesters who were shot being carried away to the ambulances. The Israelis were fortified behind a hill of sand."

Thanks to a local generator, there was electricity during the conversation we had in the evening. Most of the time there is no regular supply.

Over 2,200 people in Gaza died in the 2014 war. Ahmed lost his older brother and some of his friends. He has never left the besieged Gaza Strip.

"My ultimate dream is to travel. I've never been out of the Gaza Strip before. That's really destroying me personally."

The residents' protests in recent weeks are the most extensively organised to date against the siege. About 25,000 to 40,000 arrived on the first day, and despite the heavy repression the demonstrations have continued. On 14 May, 50,000 mobilised.

The protest movement, called the 'Great March of Return', is scheduled to culminate on 15 May, the 70th anniversary of the Palestinian 'Nakba', when 800,000 residents were uprooted and have never been allowed to return.

70% of the Gazan population are the refugees' families from 1948. Ahmed's grandmother is a refugee from Beersheba.

"We're not demonstrating in the belief that if we just protest we could return to our lands, but we want to remind the world and emphasize that it's our right", Ahmed explains. "The people of the Gaza Strip are the only people currently demonstrating in the 'Great March of Return'.

"There were no parallel demos in the West Bank or Lebanon. Why? Because of the deteriorating conditions we face under the siege."

"For example, the water shortage is terrible, and the sea, which is the only resort for refreshment in the summer, is completely polluted, because there is no electricity to operate the sewage treatment plants", says Ahmed.

Many buildings remain destroyed since the 2014 war. The unemployment rate in the Gaza Strip is one of the highest in the world, around 40% officially, or 60% among workers under 30.

Media reports describe a rise in the number of suicide cases in the last two years. The average daily wage amounts to less than 60 Shekels (£12.30).

"All sources of income are being stopped. The Palestinian Authority (PA) is adding salt to the wounds after cutting salaries for PA employees in Gaza - an income that many people depend on. Also, Hamas administrative employees do not receive full salaries.

"The UN Relief and Works Agency for Palestine Refugees has been facing a devastating crisis since Trump announced the withdrawal of US funding. NGOs (supplying work and services) are collapsing because of a sharp decline in international funding.

"Israel has also stopped transfers of budgets as well. NGO employees who are lucky enough to get paid, get only 30% to 40% of their salaries".

The crisis of the NGOs was reviewed in an article published last month by Ahmed, an NGO employee himself - coordinator of the 'We Are Not Numbers' project, which publishes the daily stories of young Palestinians. Half of the population in Gaza is under 18, about one million people.

An entire generation has grown up in this catastrophic reality. It is from among these young people that the current protests have grown.

"The first demonstration I attended was on the second protest day, 31 March. Thousands of people took part, and what impressed me at first was the positive atmosphere, people waving flags and shouting slogans for freedom.

They were far from the fence, maybe 800 metres away, near the first row of houses. The closer I got to the fence, and it wasn't much, there were more angry protesters, calling slogans, and the Israeli soldiers shot those people."

In order to paint the opposite picture of reality, Israeli government propaganda branded the demonstrators as the violent factor in the picture. Ahmed asks "who is the victim of violence in this distorted equation?"

The Israeli establishment press, slavishly serving again and again as a government propaganda tool to create security hysteria, highlights damage to agricultural fields caused by 'Molotov kites', while ignoring the extreme organised violence directed around the clock against the residents of the Gaza Strip and their protests.

The protest organising committee made it clear that it was not interested in a direct confrontation with the army.

Ahmed notes that in the face of demonstrations which include "angry young people deprived of any source of normal life," the Israeli army uses lethal weapons including, according to medical teams, particularly damaging exploding bullets (possibly dum-dum bullets).

We asked Ahmed to what extent he thinks people are deterred from participating in the demonstrations. "Most people support the protest, but there are those who say it is pointless, it will not stop the siege and the crimes against us, and some people are really afraid [to participate] in this situation.

But the majority support it and think it's a great initiative, which helps attract the world's attention to our situation."

The movement is popular, he says, and is not controlled by any of the parties. Even the organising committee, which includes representatives from the different factions of the Palestinian national movement, doesn't control every initiative on the ground. He believes there will be a continuation of the protests even after 15 May.

And he has another message. "On both sides there are victims. Our situation in Gaza is simply catastrophic.

"The Palestinians are suffering a lot. And the Israelis are sometimes suffering from insecurity.

"So we have to find a solution that will work for both sides. Israelis my age should open their eyes more. What the Israeli government is doing is very wrong.

"They should oppose it. If they demand [a change on this issue] from their government, I think we have a chance for a future.

"We should all rise up against oppression and injustice and demand normal life, life that would guarantee equality for everyone".