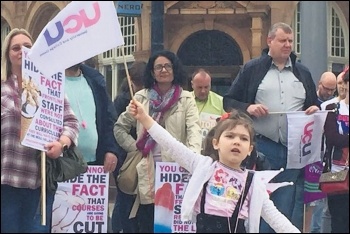 A lively demo of over 100 marched in Hull on 12 May in support of staff and students facing redundancies and cuts to Hull FE college. Some demonstrators travelled long distances to voice their opposition to the cuts.

Also in attendance were strikers from the ongoing dispute at FCC Wilmington waste processing plant.

A bucket collection was taken to bolster their strike fund.

The marchers pledged their continuing support to both the FCC Wilmington strikers and the University and College Union members who will take strike action at Hull College on 17 and 18 May.