Ronan Point disaster 50 years on - fighting for safe, affordable housing then and now 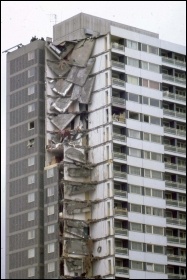 Ronan Point after the explosion and collapse, photo by Derek Voller/CC   (Click to enlarge)

On 16 May 1968, 50 years ago, Ronan Point, a high-rise tower block in Newham, east London, collapsed killing four people and injuring 17.

The reason was, as the constructors knew only too well, that the system used to build the 25-storey block was fundamentally flawed.

It was built as part of what was called the 'large panel system' where walls and floor where made off-site and then reassembled into the building itself.

The cause of the collapse was a gas explosion (a relatively small one) in the kitchen of a pensioner. When gas leaked from her cooker and exploded Mrs Hodge the pensioner along with her oven were relatively unharmed.

But the side walls of her kitchen blew off and because they were supporting walls, the above four flats collapsed into her kitchen, the combined weight of the collapse went on to collapse all the floors below right down to the ground floor and like a house of cards the whole of one side of the block was demolished.

An inquiry later concluded that the building regulations were totally inadequate and should be strengthened, including the supporting joints between the walls.

But later on, after the block was rebuilt, with the stronger joints, the council was forced to demolish the block in 1986, and an independent architect concluded, after a forensic brick-by-brick examination of the demolished block that there were shocking defects in many parts of the building including that mains gas should never have been connected to such a block in the first place.

Ronan Point is part of a sorry list of building disasters including Lakenhall House in Camberwell in 2009 where six people were killed and of course Grenfell Tower.

What runs through all this is the cold cruelty of the ruling class when it comes to the safety and security of the working class in our society. The right to adequate safe shelter is a basic human need. The inability of the present capitalist system to meet this need would by itself justify its removal from the scene of history.

But the story gets worse when we take into account the lack of organised national political opposition to the shenanigans of the bosses. Though there are many successful local campaigns by residents.

Recently in my own borough of Southwark the exposure of past crimes of negligence by the Blairite Labour leaders of the council was starkly revealed by the scandal of the Ledbury estate where four blocks were deemed unsafe because they were built using the same large panel system as Ronan Point.

The tenants had been complaining for over 20 years that huge cracks had appeared on the blocks and when they were forced to bring in their own independent expert advisors it was revealed that the blocks should never have been connected to the mains gas.

But it was not always like this and need not be so today either. The Labour government in 1947 introduced new measures to ensure that a mass council house building programme could get off the round.

For example they ruled that land that was needed to build these homes could be compulsory purchased at their present value - not at what the value would be once planning permission was given.

At the time an acre of agricultural land was worth only one hundredth of what an acre of urban land would cost.

They did this to ensure that when compulsory purchase orders where made of privately owned land then the owners could not make a huge profit. In other words the bulk of spending could go into the cost of the actual building material and labour costs to build the homes themselves.

This is what lies behind the unwillingness of Labour councils to borrow money to build council housing even if they were allowed to borrow money from the finance sector.

Under the post-war rules even the Tory government of Harold Macmillan in 1963 built more council homes than any government before or since.

The Tories later reversed the rules on land values so their mates in the property business could once again cash in on the higher land values.

Thatcher's policies in particular in housing opened up a rich vein of property speculation for profiteering developers with the introduction of right to buy. As a result 40% of homes bought under 'right to buy' are now owned by private landlords and developers.

This was a seismic shift from building homes to meet a human need to instead where homes are only built to enhance the potential profits for developers. So it is no wonder that we have seen continually the private developers seek to cut corners in the actual buildings themselves.

Successive governments, including Labour ones, have made a 'bonfire of regulations' allowing the get-rich-quick developers to cut corners.

In the North East under the 1960s Labour government the scandal hit new heights when corrupt local councils collaborated with shady developers to build council high-rise blocks with, as soon became apparent, many inbuilt problems. This was featured in the BBC drama 'Our friends in the north'.

Council estates have been deliberately allowed to deteriorate so that the media can label them 'sink estates' but there is nothing fundamentally wrong with putting homes into high rise blocks as long as they have the due care and attention to make them safe and secure.

After all, look at any of the blocks were the well-off live, such as the Barbican flats in the City of London. They are well cared for and look entirely presentable to passers-by and no doubt have all the modern safety systems, such as sprinklers, built in.

The issue of safe, affordable housing can only be resolved completely under a socialist society. But we should demand and campaign now for the policies espoused by Jeremy Corbyn, such as a mass programme of council house building. But also, as Corbyn recently indicated, compulsory purchases of land at existing value as a precursor to the nationalisation of all land.