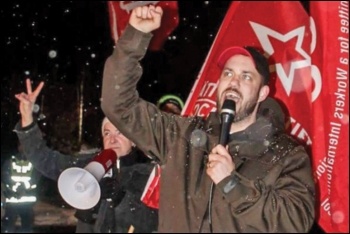 Kristofer Lundberg, a leading member of Rättvisepartiet Socialisterna (Socialist Justice - CWI Sweden), was recently elected as leader of the 77,000 member tenants' union in West Sweden with 60% of the vote from delegates to the union's regional council.

Never before has a regional election in the tenants' union received such attention, both before and after the election.

Kristofer, who made no secret of being a member of Rättvisepartiet Socialisterna, stood on a platform to: "Rebuild the Tenants' Union into a fighting organisation."

The newspaper, G-teborg Direkt, that reaches all of the city's households, with a circulation of 1.2 million, wrote that Kristofer: "...wants to make the tenants' union an organisation of struggle and mobilise members. This weekend Kristofer Lundberg was elected as the new chairman of West Sweden - despite opposition from the union tops."