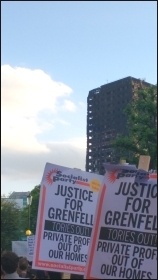 The Grenfell inquiry has opened with heart-rending tributes to the people who perished from their loved ones.

A community has been devastated because of an entirely avoidable series of events, driven by profit.

The 'social' landlord and the council ignored and bullied residents who made remarkably clear fire safety warnings. The government sat on the necessary improvements to building regulations after the 2009 Lakanal House fire, pressing ahead with their profit-obsessed "bonfire of regulations."

And it now transpires that Celotex, the firm responsible for the combustible insulation around the tower, cheated safety tests by treating the material with additional fire retardant! BBC's Panorama reports that lawyers advise this could amount to corporate manslaughter.

In a scandalous reminder of the real impact of Theresa May's Blairite-backed "hostile environment" for migrants, some family members were unable to attend the inquiry's opening session because the Home Office has failed to issue visas!

Ministers wept crocodile tears about the treatment of the Windrush generation while the Home Office continued to drag its heels over Grenfell families.

For the survivors and community it is essential the truth comes out and the individuals who took the catastrophic decisions brought to justice. That is for the sake of the dead. But also so that Grenfell is never repeated.

There are 220 buildings with similar cladding across the country. Scarcely any residential towers have sprinklers. And numerous other risks, from insufficient fire doors to gaps in walls, are coming to light.

Eleven months after, little progress has been made. How many potential Grenfells remain?

This tragic fire has become a symbol of an unequal, deregulated society, driven by profit to the exclusion of all else. But the callous and incompetent response of a weak government has become a further scandal.

Not only was it left to the community to organise support for survivors in the immediate aftermath of the fire - but despite May's pledge that all would be rehoused within three weeks, families still languish in hotels eleven months on.

We have argued for an independent workers' and community inquiry to expose the truth and keep up the pressure.

The government has been pushed into adding two experts to the inquiry panel despite previously ruling this out. Campaigners and survivors had demanded this, trying to counterbalance retired judge Sir Martin Moore-Bick's record of backing social cleansing. The Tories must be pushed into more u-turns.

Jeremy Corbyn must renew the call made in the aftermath of the fire to requisition empty homes and find quality, permanent local housing for survivors.

We say: no safety, no rent!