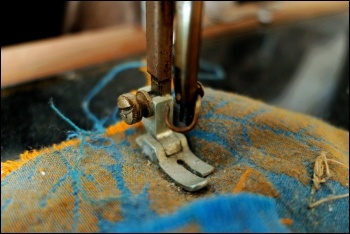 The full effects of Tory policies, both economic and social, are being felt in Leicester, as sweatshop conditions and shocking illegal levels of pay persist in 2018. And the "hostile environment" migration policy means it's harder than ever for workers to fight back.

A recent Financial Times article shed new light on an issue Leicester Socialist Party has been campaigning on for years, with workers in some of the city's clothing and textile factories revealing they are paid as little as £3.50 an hour.

£5 is considered a 'top wage', despite being well below the minimum wage of £7.83, and even further below the living wage of £8.75. With wages across the country lagging behind inflation, illegal poverty wages are doing further damage to already-precarious living standards.

Bosses are getting away with these illegal levels of pay by dangling the fear of deportation over workers' heads thanks to the Tories' "hostile environment" policy. The Tories' policy traps them in a poverty cycle where wages can continue to be driven down.

There has been no appetite among the political establishement to tackle the issue, either. The Tories' contemptuous labelling of their minimum wage as a 'living wage' shows their attitude towards fair pay, and neither their rhetoric nor policy has shown any intent to enforce it.

Notably, HMRC's 'minimum wage enforcement team' has been devastated by cuts in recent years - leaving bosses able to operate illegally without fear of reprimand. And what little additional funding the Tories have been shamed into giving is still woefully inadequate.

This is what we mean when we call the Tories 'the bosses' party' - their policies always conspire in the favour of the powerful at the expense of the vulnerable.

Leicester Socialist Party continues to campaign on the issue, but more is needed to overcome this localised cycle of poverty.

We say unions must intervene and offer workers the structure and support to fight for fair wages and conditions. No more racist and divisive Tory rhetoric stifling workers' rights!