Editorial of the Socialist issue 996 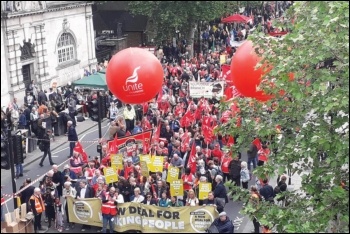 As the deadlock at the top of the Tory Party continues, Tory MPs are reported to be telling their constituency parties to prepare for another snap general election.

In one sense nothing has changed. The government - extremely weak and split down the middle over Brexit - has been on the verge of meltdown since the last snap election. The capitalist class, however, has preferred to keep May in office and hope that she can push the Brexiteer wing of her party towards a Brexit in their interests: one that is as close to EU membership as possible. They want, if at all possible, to avoid the alternative - a Jeremy Corbyn-led Labour government.

Nonetheless, they may be unable to avoid a snap election. May's latest wheeze to try and keep the show on the road despite her inability to get anything agreed by the cabinet, is to propose the whole of Britain effectively remains in the Customs Union beyond December 2020 when the 'transition period' ends; until something better turns up. It is not clear what attitude the institutions of the EU, never mind the other 27 EU countries, would take to this. With Italy, the third biggest country in the EU, on the verge of forming a right-populist, anti-EU government, the fear of concessions to May triggering a domino effect across the continent could stay the EU's hands.

The Remainer wing of the Tory Party could certainly live with this plan hoping it could, as the Financial Times put it, "be a politically expedient route to a permanent customs union". It is not clear, however, that the Brexiteers will do so. Walkouts from the cabinet from Johnson or others, designed to force May to resign, are obviously being considered either over this, or one of the many other Brexit crisis points that will arise between now and when the Withdrawal Treaty is scheduled to be agreed by the EU at the end of the October.

The capitalists are therefore preparing to try and make sure another general election, whenever it happens, has an outcome which, as far as possible, suits their interests. A central part of their approach is to step up their attempts to damage Corbyn, combined with trying to pressurise him to adopt a pro-big business approach to Brexit.

The Blairite wing of the Labour Party is, inevitably, happy to oblige. Hence the sudden escalation of cynical false claims that Labour is riddled with antisemitism, completely ignoring the fact that even a cross-party parliamentary report found antisemitism no more prevalent in Labour than any other political party. Currently the Blairites are conducting their sabotage as part of the Labour Party but they are also considering splitting and founding a new party, perhaps together with 'Remainer' Tories, in order to try and prevent Corbyn winning an election. 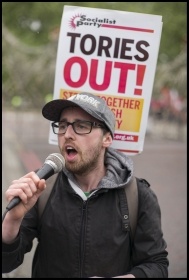 It is therefore a serious, and potentially very dangerous, mistake for the Labour left to continue to retreat in the face of the right's attacks. The most recent surrender has been by Ken Livingstone, who has resigned from the Labour Party rather than fight for the lifting of his suspension. Clearly, he was under pressure to do so. Incredibly, the shadow attorney general and Corbyn supporter, Shami Chakrabarti, even declared before any hearing that there were 'no circumstances' under which Livingstone would not be expelled. This was a complete denial of the right to a fair hearing before judgement is reached (see 'Antisemitism, Israel-Palestine, and the left' in the current issue of Socialism Today).

Livingstone has justified his retreat by arguing he had become a distraction from winning a Jeremy-Corbyn led government. Corbyn also mistakenly welcomed it as the 'right decision'. Many Corbyn supporters will sympathise with their reasoning, but it is fundamentally flawed. In reality, Livingstone's and the many other similar retreats by Labour lefts are only strengthening the Blairite saboteurs who are determined to prevent a Corbyn-led government coming to power and, above all, implementing radical policies.

Christine Shawcroft's resignation from the Labour Party national executive committee, for example, severely weakened the left majority won just months earlier. At the same time the Labour left's increasingly weak leadership is inevitably acting to demoralise those who hope that under Corbyn's leadership, Labour could become a party for the working class, with socialist policies.

Another example is the Lewisham East byelection, where an open Blairite - Janet Daby - has been selected. She has immediately tried to claim that the election result - in a safe Labour seat - will be a referendum on Britain remaining in the Single Market - with all of its anti-working class, pro-privatisation rules remaining intact. One of the candidates who might have defeated Daby, Phyll Opoku-Gyimah, head of equality at the PCS civil servants' trade union, was again pressurised to stand aside over alleged 'antisemitic' comments.

It is long overdue that these retreats cease. Len McCluskey, general secretary of Unite the Union, has correctly pointed out that Labour MPs who are campaigning on antisemitism are largely the same MPs who have been determined to defeat Corbyn from day one. Other Corbyn-supporting union leaders, including Mark Serwotka, general secretary of Phyll Opoku-Gyimah's union the PCS, should also make clear that they oppose this baseless witch-hunt, and that they favour measures to transform the Labour Party and to remove the Blairites from office, starting with the immediate introduction of mandatory reselection.

This needs to be linked to Corbyn going on a political offensive to campaign for, and build on, the anti-austerity programme he put forward in the snap general election, including the immediate introduction of a £10 an hour minimum wage, free education, rent controls and mass council house building.

It should also be linked to nationalisation of the banks and major monopolies under democratic workers' control. It is essential that Corbyn does not give in to the pressure from the capitalist class - via the Blairites - to accept the neoliberal rules associated with membership of the Single Market. Instead, Corbyn should develop his current stance, calling for an internationalist and anti-racist Brexit in the interests of the working class majority.

These issues will also feature in the debate currently taking place in the RMT transport workers' union on whether or not to affiliate to Labour as it is currently constituted. The RMT has long opposed the neoliberal EU Single Market and its associated directives on rail privatisation. It has also consistently supported Jeremy Corbyn's leadership of the Labour Party, with donations to his leadership campaigns second only to Unite. On 30 May it will be holding a special general meeting to discuss whether to affiliate to the Labour Party, or to continue its current policy of supporting Jeremy Corbyn but maintaining its political independence.

The view of Socialist Party members in the RMT is that with the terms currently on offer, affiliation would be a mistake. The virtual destruction of union influence in the Labour Party, which has not as yet been reversed, would mean that handing the maximum £240,000 affiliation fee to the largely unreconstructed Labour Party machine would give the RMT less than 1% of the votes at Labour Party conference. This would, for example, give the RMT very little weight with which to counter the inevitable attempts of the Blairites to win a vote for supporting the Single Market at Labour Party conference.

Better to launch a campaign - involving affiliated and unaffiliated unions - to demand the restoration of trade union rights within the Labour Party as part of the struggle to democratise it and to urgently remove the saboteurs. This would be the best way to prepare for a Corbyn-led government.