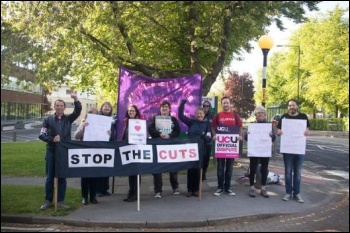 Staff at Harrogate College were back out on strike for two further days on 17-18 May. This is part of action across the Hull College Group. Some Unison members have refused to cross the University and College Union (UCU) picket line, leading to the library service being shut on the second day of action.

College management made the ludicrous claim in the press that there will be no effect on provision. Yet there will be no full-time higher education courses, no staff in the library before midday, no security staff and whole departments such as art will have no staff left!

Student support was prominent again. Many signed the petition against the cuts.

Creative placards on the picket line said 'stop targeting hardworking staff' and 'what about the next generation?' And one simply contained the name of the cuts package - 'Fresh Start' - and a cartoonish turd!

There is a real threat of important services disappearing from Harrogate. Cut at the college, the threat to remove guards from Northern Rail (the bulk of services to Harrogate), and the proposed closure of the briary wing at Harrogate hospital.

College cutbacks are not just unique to Harrogate & Hull. UCU members in Leeds took part in a joint protest with other trade unionists over cutbacks there. They've also won ballots for strike action at Kirklees and Bradford colleges recently. Bradford UCU members are due to strike on 23 May.

The battles against cuts taking place across the further education sector need to be linked up, challenging the underfunding of the sector which is driving its current increasing commercialisation.