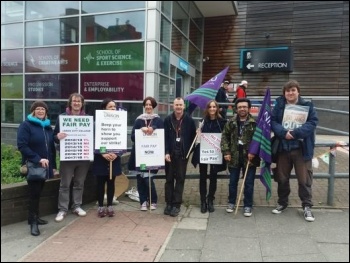 In November 2016 workers at the Vine, a specialist education service, were transferred from Leeds City Council into Leeds City College.

Vine was operating on a 'shoe-string' budget cut to the bone with little resources because of council cuts. The council wanted to cut further. The service provision and the staff were caught between the devil and the deep blue sea.

Staff were sold the idea that we would move to Beeston, south Leeds, over a three-year period. There would be no detrimental change, and even better, resources would improve.

The reality is that the service did suffer further cuts, we didn't move to Beeston and we only had a stay of execution.

The college did not take a real look at the true cost and running of the service during the time it was within the council. They quickly became aware of the cost and the poor state of the building after the transfer.

Morale has been low among staff. The service has been downsized over the years, our building space has been cut in half, and the number of staff contracted. We have been dragged kicking and screaming further into the abyss.

Instead of cuts by stealth, services need more investment in resources and staff. Services should have a future that our learners can enjoy and make progress and are well supported in their time with us. Cuts in funding force the commercialisation of colleges and a move away from the idea of universal free quality education for all.

We must unite together to oppose these austerity measures and fight to improve our pay, terms and conditions as well as defend jobs and fight for more education resources.