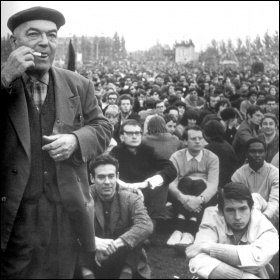 50,000 attended the mass meeting at Charléty Stadium, despite the Communist Party warning them off   (Click to enlarge)

By Friday 24 May 1968, ten million workers were on strike. The greatest general strike in history. On the same day, the president of France, General Charles de Gaulle, tried to address the nation. Nobody saw it. It was a victim of the TV workers' strike.

It was only heard on radio - with the permission of the striking radio workers. It satisfied no one.

Even Gaullists joined the call for de Gaulle's resignation and the Constitutional Council was warned it could expect to receive it.

That night's storming of the barricades by state forces saw the worst violence yet. But the workers and students stood firm, shoulder to shoulder on the barricades.

Trade union leaders went into talks with the government on Saturday 25 May. The union leaders were desperate to end the strike they couldn't control. Eventually, the bosses agreed to substantial pay rises, shorter hours, longer holidays.

Georges Séguy, general secretary of the 'Communist'-led union federation, the CGT, took the 'deal' to the Renault car plant at Billancourt - an enormous stronghold for the CGT. Within minutes he was booed.

Factory after factory rejected the offer. As Clare Doyle writes in 'France 1968: Month of Revolution', workers "wanted more than better wages. The transformation of their lives was within sight."

On Monday 27 May, in Paris's Charléty Stadium, 50,000 crammed into a mass meeting organised by the students' union. Scandalously, the Communist Party had told people to stay away!

But there was no clear programme put forward to sweep away capitalism and de Gaulle and transfer power to the democratic workers', students' and peasants' committees across France.

By Wednesday 29 May, London's Evening Standard was saying of de Gaulle that "all the constitutional weapons which he himself forged to protect his regime in just such a crisis are now so many pieces of paper, even the weapon of the referendum is useless...

"The strikes have acquired an exclusively political character aimed at overthrowing the regime... in no circumstances will even the most generous offers be accepted."

De Gaulle's referendum on vague promises of "participation" will not take place. No printers will print it. The Constitutional Council - in normal times ultra-loyal to the establishment - declares it unconstitutional. That night, half a million join a CGT protest.

A general strike poses the question of power. Who will take it? If the revolution doesn't, doubt will set in, and the old order will come back.

A cabinet meeting due to take place that day never did. De Gaulle had disappeared. Years later, the prime minister at the time, Georges Pompidou, said: "In reality, the general suffered a crisis of morale. Thinking the game was up, he had chosen to retire. Arriving in Baden-Baden, he was ready to stay a long time."

He met with the 70,000-strong French army stationed in Germany and demanded its loyalty. The commander, General Jacques Massu, promised it - even though many of his soldiers had other ideas.

De Gaulle then spoke to the nation on Thursday 30 May, now confident enough to dissolve parliament and call elections for June. A million pro-Gaullist demonstrators marched through Paris after the speech, as troops manoeuvred around the capital.

In Britain, the Economist had understood the strength of the working class movement and the general strike. "In electoral terms the two big demonstrations carried almost equal weight, but at a time of social upheaval, it was those who could paralyse the economy who carried the most."

In this series of articles, we've discussed Lenin's four conditions for revolution. The first three possibly reached a higher level in France than anywhere in history so far. The ruling class was split.

The middle classes were no longer a base of support for capitalism. Many middle class people had been won over and even joined the strike.

The working class was willing to go the distance and take control.

A mass workers' party with a leadership willing to take the revolution through to a successful conclusion - the fourth and most important condition for a successful revolution - was missing in France.

But the Standard was right to say on 29 May that "the situation today can be summed up in a few words - it is a revolutionary situation of an almost textbook kind."

The police and army, capitalism's last line of defence, were wavering. There was talk of a police strike on 23 May. There was a mutiny on the aircraft carrier Clemenceau at the end of the month.

Soldiers formed committees to stop the army being used against the strike. The committee of a regiment near Strasbourg distributed a leaflet promising it "will never shoot on workers."

If it hadn't been for the betrayal of the workers' leaders, the ruling class could not have used its state forces to help put down the revolution.

Once the moment for taking power had passed, there was brutal police violence. Throughout June they forced strikers back to work. There were deportations of foreign students and other migrants and victimisation of trade unionists.

Demoralised workers started to go back in. But despite the lack of a lead, some held out.

The electoral system was undemocratic, weighted against the left. Communist Party deputies, on average, needed five times the vote of the Gaullists to win each seat. And millions of students, young workers and migrants had no vote.

And the 'Communists' campaigned on 'law and order' in the election. They refused to call for public ownership, democratic workers' control, or anything that would have given the striking workers what they wanted.

So the Communist Party actually managed to lose votes compared to the previous election. The Gaullists gained!

Instead of helping to revive these rigged establishment structures, the Communist Party could have called for all power to the democratic committees thrown up by the strike.

Instead, it told workers only to negotiate the best deals possible. The CGT even agreed catch-up deals for productivity lost during the strike!

The Communist Party of France was motivated by trying to protect the bureaucratic clique at the top of the Soviet Union from a movement that would spread democratic socialism around the world. The Soviet Union didn't even give an opinion on the May struggle until 5 June!

The societies governed by Stalinist dictatorships were already suffocating from the lack of workers' democracy. A successful democratic socialist revolution in an advanced capitalist country like France would have spread like wildfire. It was as much a threat to Stalinism as to capitalism.

But we can nonetheless take great hope from the events of May 1968. A revolution on our doorstep. The Socialist Party and Committee for a Workers' International campaign for a revolutionary leadership that is ready to fight to the end.

Cardiff Socialist Party: France '68 - When capitalism was on the brink