The children I work with are in primary school and have severe learning difficulties, making them unlikely "targets" for "radicalisation." But the training seems to have more to do with encouraging suspicion than enabling educators to protect young people in their care.

I was aware of the controversy surrounding Prevent. Many groups including the Socialist Party have attacked it as racist. But I was still shocked.

They say they "want this training to be inspiring." The children I teach inspire me every day with their resilience through adversity - not training designed to make me suspect them.

You're warned that "it is likely that you would notice many signs of radicalisation as part of your day to day job." What can possibly be intended here except to make people who work with young people into paranoid state informers? 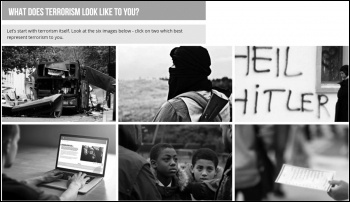 They then ask "what does terrorism look like to you?" letting you choose two pictures from six (above). One shows two young black boys being approached by older men; another shows someone using the internet; another someone holding a leaflet. You're told "all of these images could be representing terrorism"!

Bizarrely, if you select the image of graffiti saying "heil Hitler" (below) you're only told it "might represent the actions of someone taking on board such ideologies." Why else would you spray paint Nazi slogans? 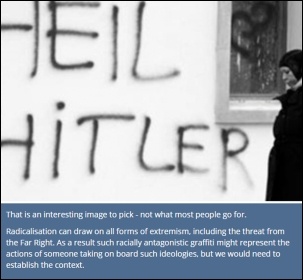 As the training continues the agenda becomes clearer and clearer.

"Radicalisers" and "targets" are presented repeatedly as black or Asian, far more than white. A voiceover says "of course, there's no single profile of a terrorist." So why are you repeatedly shown the same "profile"? 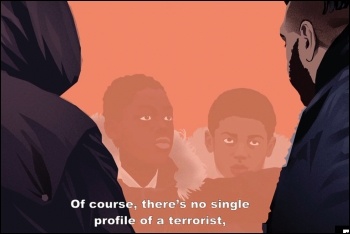 You then have to choose a video which is most relevant to you. One option is an Asian teenage woman, the other a white teenage man. I watched both.

Both contained concerning messages - particularly the one featuring the young woman, Farah. During Farah's "radicalisation", "concerns" you are expected to flag up include using the internet, criticising the media, handing out literature and attending meetings!

Farah describes that literature as attacking aid not going where it should and innocent people being maimed and killed. How can anyone look at the actions of western imperialism in the Middle East and not share the same concerns?

Imperialist war is one of the main horrors pushing some young people towards "radical" ideas - whether those ideas are the perceived radicalism but ultimate dead end of terrorism, or the genuinely radical ideas of socialism.

You can also watch the "radicalisation" of a young white man into the far right. The training seems to downplay it by comparison, pointing to legitimate factors like his personal life and concerns about employment opportunities.

He is told simply that "he is in control of his own future." Unfortunately this isn't really true for any of us under capitalism. Heavy-handed state intervention certainly won't win over angry young people attracted to reactionary "radical" movements, nor will platitudes like this. 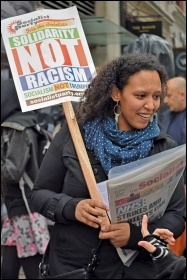 We are encouraged to refer suspect students to 'Channel', "a multi-agency approach to identify and provide support to individuals who are at risk of being drawn into terrorism." This may sound positive. But they make clear that all referrals - even where no further action is taken - are passed onto the police!

The video also rightly emphasises the role of local services - the same services being decimated by austerity. Because of cuts, social workers often can't visit schools when young people disclose domestic abuse - how can they pick up the Channel workload as well?

Throughout the whole training, only one genuine education worker features. This is Adam Whitlock, an RE teacher in London, his school's "primary contact for concerns relating to extremism."

Whitlock is a Tory activist who has given an interview to the hard-right US news site the Daily Signal about his work in "counter-extremism." He is clearly not representative of most teachers. It's concerning someone with his views is so heavily involved in Prevent training.

We have seen how the state infiltrates left and workers' organisations, including the Socialist Party, to try to undermine them. The ongoing Mitting Inquiry into undercover policing is trying to whitewash it.

Prevent training does for example show a protester holding a placard (above), but does not explicitly target left groups right now. But clearly Prevent can and will be used against socialists and trade unionists. In fact, one university has already used Prevent-related bureaucracy to stop a Socialist Party member speaking at a student meeting.

Socialists oppose the racist paranoia of Prevent. We fight to win over young people and workers to the fight for a socialist world, without war and terror.

Marxism has always opposed the dead end of individual terrorism. But persecution by the capitalist state provides no alternative to the problems which drive some young people towards it.