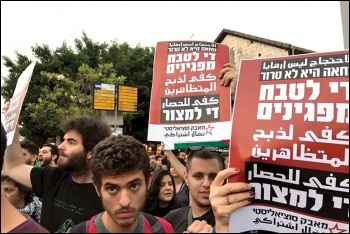 By the secretariat of Socialist Struggle Movement, Israel-Palestine

While in Jerusalem a messianic inauguration ceremony was held for the American embassy, in the Gaza Strip, the day of the embassy's transfer was the deadliest day since the war in 2014.

The Netanyahu government, hand-in-hand with a despicable incitement campaign, sent an army to drown in blood the mass protest of residents who are suppressed under the brutal siege imposed on them for over a decade.

About 60 demonstrators were shot dead in one day, adding to the dozens slain previously in demonstrations in recent weeks.

Among those killed were youths aged 14-16, and an eight-month-old baby who died after massive exposure to the tear gas.

The massacre of the demonstrators - in the service of perpetuating the siege and oppression of the Palestinian workers and poor - did not prevent Netanyahu from declaring "a great day for peace"!

The provocative transfer of the American embassy underscores the backwind that the Trump government is providing for the continued trampling of the rights of the Palestinians, including to their own state and a capital in Jerusalem as well - rights that the US ambassador to Israel, hardline rightist David Friedman, explicitly denies.

The same administration, which provided full backing for the massacre, will continue to recite cynical slogans about peace and promote the "Deal of the Century", based on continued support for the Israeli occupation and the denial of Palestinian rights.

As if raising the flame of the conflict is not 'enough', the US's withdrawal from the Iran nuclear agreement will further increase the national tensions in the region, and its consequences can be very destructive, including a real danger of war.

Protest is not terrorism!

Socialist Struggle Movement has made it clear over the past few weeks that contrary to the propaganda of the Israeli establishment, which fostered security hysteria and labelled the protest movement a "terrorist incident", this is a just and important civil protest, which should receive solidarity also from Israeli workers.

The International Trade Union Confederation (ITUC) condemned the killing and wounding of demonstrators by the Netanyahu government, as well as the transfer of the embassy led by Trump.

It is the responsibility of the heads of the workers' organisations in Israel to adopt a position in such a spirit, so to help point out a solution for the workers on both sides of the national divide.

The protest of the "Great March of Return" is the most significant protest to date against the siege.

The mobilisation of tens of thousands to demonstrate in the struggle for their lives is a source of hope.

On the day of the transfer of the embassy, the Gaza Strip was shut down and some 50,000 demonstrators were reported - a figure which is equivalent to demonstrations of about 200,000 people in Israel, according to the size of the population.

Weeks of demonstrations of thousands and tens of thousands resulted in zero Israelis injured or dead, compared with about 110 Palestinians killed and about 10,000 injured in the Gaza Strip, mostly by live ammunition.

These dry figures alone ridicule the cries of the Israeli establishment of "violence" and the alleged danger posed by those demonstrations, and illustrate who faces the large and organised violence - a one-sided war against demonstrators, including sniper fire and tanks.

Desperate actions by individuals or groups, such as the number of arson incidents by "arson kites" or the damaging of gas pipes at the entrance to the Gaza Strip, caused minor damage, but they are first and foremost the result of the terrible distress forced daily with an arrogant thuggery by the Israeli capitalist government.

Due to the blockade, the residents of the Gaza Strip face four hours of electricity a day, a lack of drinkable water, the collapse of infrastructures, a rate of unemployment of the highest in the world, severe restriction on freedom of movement, prevention of medical treatment, and the shooting of fishermen, farmers and demonstrators. Against this background, there have even been reports of a jump in suicide incidents.

Yes, the right-wing leaderships of Hamas and the Palestinian Authority contribute to worsening the situation, each in its own way, but the main control over the Gaza Strip remains in the hands of the Israeli right-wing rule.

This, in cooperation with its Egyptian counterpart, enforces the blockade as a policy of collective punishment against about two million people, half of them under the age of 18, in a long and failed attempt to force a change in the political leadership.

The Israeli establishment jumps, as if it finds a big booty, on Hamas' claim that 50 of those killed in recent weeks were allegedly from its ranks, as if the political identification of the casualties changes the fact that these were unarmed demonstrators, not endangering anyone, who were shot to death with live ammunition.

Similarly, the military's claim that 24 of those killed on 14 May had allegedly a past "background" of "hostile terrorist activity", was completely irrelevant.

These are demagogic excuses - the army fired with no distinction related to the political identity or the past of the wounded and the dead.

It should be noted that while it appears that Hamas was involved and to some extent influenced the demonstrations, not only were the demonstrations themselves justified as stated, evidently they were widely supported and mobilised mass participation from all political streams as well as from residents unaffiliated politically.

There are also critical voices from among the protest activists on the role played by Hamas. Hamas itself does not tend to offer at all a path of mass struggle, but it certainly tried to exploit the development of the protest to mobilise public sympathy it has lost due to its failure to offer an effective strategy for a way out from the crisis in the Gaza Strip.

The residents of the Gaza Strip, and only them, should have the right to choose their leaders democratically, and the possibility to replace failed leaderships that do not serve them.

The real threat posed by the protest on the agenda was not "the extermination of Israel", as Netanyahu incited - he himself knows how ridiculous this argument is with the balance of power between the thousands of demonstrators and the strongest military force in the Middle East.

The real threat for the Israeli establishment was the sheer heroic daring of masses of Palestinians - women and men, young and old - to insist on disturbing the order of intolerable oppression and poverty imposed on them, and to demand change.

As part of the regime propaganda, there's a recycling of the claim that attempts by demonstrators to break through the huge prison fence practically justify execution - not even demonstration dispersal means or arrests, but execution.

This claim sides with the right of the Israeli right-wing regime to continue to enforce the siege on the Gaza Strip's poor by all necessary means, including killings.

Socialists sweepingly reject such a siding with the actions of the capitalist government, and support the right of the residents of the Gaza Strip to protest, to struggle, to organise and also to defend themselves against military aggression.

If the right wing rule does not want to see masses breaking through the siege fences, no one is preventing it from lifting the siege and allowing freedom of movement for residents and goods in an arranged manner through the crossings.

The real threat, which the Netanyahu government worked to thwart via murderous repression, was the expansion of a mass popular struggle, that could have forced the Israeli right-wing regime to withdraw from the siege policy and was capable of marking the way for the Palestinians in general to build an effective struggle to change the situation on the ground.

It is to be hoped that despite the barbaric repression of the demonstrators in the Gaza Strip, the protest there will succeed in renewing from below on a large scale with the demand for change.

However, the Netanyahu government prefers a round of military confrontation with Hamas over mass popular protest.

It therefore sent fighter jets to bomb in the Strip in response to several attempts by demonstrators to break through the fence of the world's largest prison, and threatened to renew the policy of assassinations against Hamas leaders.

In its actions to protect the siege and occupation, the Netanyahu regime increases the danger of another round of bloody war.

The right-wing government also continues to reject repeated proposals for conflict de-escalation, and for rehabilitation of the Gaza Strip - such arrangements have been on the table for years, and could have prevented the horrific rounds of war that sowed bereavement and destruction in a monstrous scale in the Strip, and which have also included rocket fire and attacks on Israeli civilians.

Socialist Struggle Movement continues to warn that the number one security threat for Israeli workers is Netanyahu's 'Capital and Settlements' government, and its destructive nationalistic-messianic agenda, with the cooperation of Netanyahu's imitators - Lapid and Gabbai - of the "opposition".

In the face of this danger, a struggle should be built, on both sides of the national divide, and an alternative of socialist change should be put forward in order to offer a way out of the path of deterioration to the abyss lead by Netanyahu, Trump and their partners.