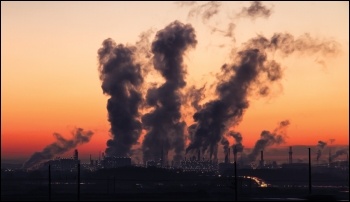 And after years of inaction, the European Union has threatened only to start proceedings towards a possible fine - largely toothless in reality - at some point in the next two years, if the British government goes on ignoring the problem.

Meanwhile, air pollution causes over 400,000 early deaths in the EU each year - according to the European Union itself.

Pollution is a mass killer. You can't always see or smell it, but it is there. Why in the world do we have to tolerate this, and also the damage to planet Earth?

Toxic air is primarily a product of diesel vehicles, tyre and brake dust, and solid fuel burning, but can also come from inside a building itself. Levels of nitrogen dioxide, predominantly produced by diesel vehicles, have broken EU limits since 2010 in the majority of city areas in the UK.

Air pollution knows no borders and puts everyone at risk. Those most vulnerable - pregnant women, children, the elderly, those already ill or poor - are particularly affected.

It starts to harm a child in the womb: premature birth, stillbirth, miscarriage, low birth weight and organ damage. Pollutants breathed by the mother could cross through the placenta to the baby, damaging lung and kidney development and increasing the chance of asthma and diabetes in later life.

The European Court of Justice has threatened to pursue legal action which may result in fines. Why has it taken years of rule-breaking and potentially millions of premature deaths to get to this point?

When refugees arrive, some fleeing the bombs of EU member states, the EU acts instantly to close borders. When the working class of Greece voted to reject EU austerity, the EU imposed further austerity straight away. The EU immediately supported the Spanish state's violent repression of the Catalan national liberation movement.

New technology is there - we can ensure clean air for all. The neoliberal EU and Tories won't invest fully in this because the oil market will fall and profits suffer.

Only public ownership of energy and transport, as part of a democratic, socialist plan of production, can guarantee the motivation and resources to end poisonous air. EU rules restricting nationalisation and promoting free market capitalism stand in the way of this.

Jeremy Corbyn is right to say Brexit must mean escaping these anti-worker rules. Tories and Blairites out! Fight for a socialist, internationalist, environmentalist Brexit!