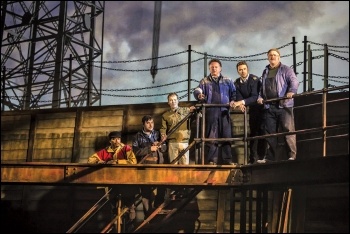 Scene from The Last Ship, photo by Pamela Raith   (Click to enlarge)

It's not often that a West End-style stage musical can be politically inspiring. But imagine one with amazing sets, great music by Sting, a strong cast - and an anticapitalist story line. That's 'The Last Ship'.

Returning to the Tyne after 17 years at sea, sailor Gideon gets two shocks.

Not only does he learn that the girl he left behind was pregnant and he now has a teenage daughter - but that the shipyard, the main local employer, faces closure. The near-completed ship is to be scrapped, along with all the jobs in the yard.

The manager and a Thatcher lookalike cabinet minister give the workers a lesson in capitalist economics: no one wants to buy the ship - it could be built cheaper abroad - and its only value is as scrap. The workers go on strike but then decide to occupy the yard and finish the ship.

The foreman, Jacky, effectively echoes the words of Bob Crow: "If we fight we may lose. If we don't fight, we will certainly lose."

In one of the most powerful scenes, when the workers hear that mounted riot police are massing to retake the shipyard, Jacky's wife Peg leads the women of the community to form a human shield. She says "the BBC won't be able to edit this report like they did at Orgreave to make it look as if unarmed women are attacking the police."

The show ends with the huge ship sliding down the slipway into the Tyne. Victory for the workers.

Although we are left wondering what happens next. Where is the ship going? It is no accident that the ship is named Utopia!

The characters are well-drawn: foreman Jacky, the sailor Gideon, a shop steward quoting Marx; another who can only express himself by reciting poetry, another who has become a hopeless drunk.

Refreshingly, there are three really strong women characters in Peg, and Gideon's girlfriend Meg and daughter Ellen. The songs, and the singing, are first rate. The message is one of working class solidarity.

All in all an excellent night out with a good message.

In May I went to see The Last Ship. I was pleasantly surprised by the whole show.

Previous generations of my family worked at the shipyards on Tyneside so I was expecting a bitter and nostalgic journey about the destruction of heavy industry in the north east. And that was an important part of the musical.

But it was more than that. It brought out the pride that skilled workers had in producing the ships of Tyneside.

It brought out, too, the conflict within the workforce between a socialist union steward and a more reformist foreman, against the capitalist owner and a thinly disguised Margaret Thatcher figure.

Women featured quite strongly in the show. The songs were good and the cast were very talented. And there was a love interest thrown in too!

I did think The Last Ship was meandering to a pessimistic close. However, right at the end, a cast member came to the front of the hall and spoke to the audience about how change can come from below.

She highlighted the Occupy movement, the fight to keep the NHS - and the feminist strike and protest in Spain (in fact, the Socialist Party's sister party Izquierda Revolucionaria played a leading role in that). I was gobsmacked by the end!

I'm sure most people going there didn't expect a left-wing message. It's not cheap either to get in. But if you can go, it's a good show. Maybe we should ask Sting for a donation to the Fighting Fund...