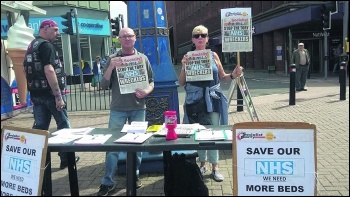 Stoke Socialist Party has decided to do as many town centre campaign stalls as possible in the weeks leading up to issue 1000. On all of them between now and 21 June (first day of issue 1000) we will be asking people if they want to pay for their copy of issue 1000 now and we will deliver it to them in that week.

We're using the front page of the paper as our unique selling point. We tried this Saturday 9 June in Hanley with a copy of the front page mounted on a placard. It drew people to the stall, and many bought a paper. 25 copies were sold. The bar has been set!

We intend to do some door knocking on local council estates. Many residents will remember us standing Trade Union and Socialist Coalition (TUSC) candidates, our past campaigns and support for many local strikes over the years.

We'll sell the paper outside workplaces like McDonald's and TGI Fridays, where strikes have taken place nationally against low pay. We won't forget the colleges, two universities, Royal Stoke Hospital and Stoke station.

On 23 June there is a local protest Hanley - Stand up for our NHS. Our intention is to set up as many campaign stalls as possible at the event.

The following week after issue 1000, 28 June, we will be holding a public meeting. We'll invite anyone we have met during the campaign who wants to find out more about the Socialist and the Socialist Party. We'll advertise the public meeting along with the issue 1000 campaign through press releases, leaflets and a facebook page to further spread the word.