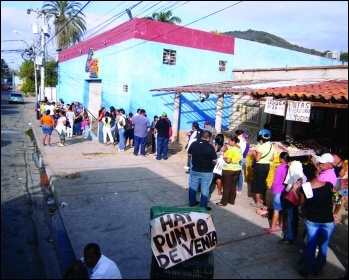 On 20 May there were presidential elections in Venezuela. Incumbent Nicolás Maduro won with 6.2 million votes, ahead of Henri Falcón (a general and ex-state governor who went from 'Chavismo' to the opposition in 2010) with 1.9 million. Turnout was 46%.

US and European imperialism and right-wing governments in Latin America launched a hysterical campaign, denouncing the results as 'not valid' and presenting themselves as champions of democracy. People like Donald Trump, who has treated democratic rights with disdain and who was elected with almost three million votes less than his opponent, show the real character of US capitalist 'democracy'. Temer, the Brazilian president, was put in place by a parliamentary coup.

And the European ruling classes rule through unelected EU bodies and national governments which are more and more corrupt and discredited and impose harsh cuts and attacks on democratic rights.

This reflects the problems that imperialism has in getting its puppets in the MUD (right and extreme right-wing coalition) into power in Venezuela. The MUD emerged very weakened and divided from its attempt to boycott elections to the national constituent assembly and its attempts to take power through violence in 2017.

Imperialist governments and their media try to present the high rate of abstention in these elections (53.9%) as support for the MUD. They hope that this campaign of attacks, together with the economic collapse and increasing discontent with the policies of the Maduro government, will help bring their followers back onto the streets.

Despite this manipulation, the record abstention in these elections confirms that, compared with the massive support which the Hugo Chávez government had (due to the progressive measures and reforms which it applied in response to the masses) Maduro's bureaucratic government - with its policy of managing capitalism, seeking an alliance with sections of the Venezuelan ruling class, as well as attacking the revolutionary left - has alienated many.

This scepticism among the masses, together with the deep crisis Venezuela is going through - with inflation out of control, shortages and the paralysis of production - is being used by the capitalists inside and outside Venezuela to present the country as another 'failure of socialism' to strike a blow against any mass movement which questions austerity and privatisation.

The reality is that in Venezuela socialism has not failed because socialism has never been implemented. The reforms, and social policies applied by Chávez won him mass support, but he stopped halfway, without taking the necessary steps to move towards socialism, such as expropriating the banks and big companies and putting them under the direct control of the working class.

So the measures which improved the living conditions of the people inevitably clashed with the interests of big business and the bureaucratic control of the state. This had already led to a loss of electoral support in the last years of Chávez's presidency. After his death, and the turn to the right of Maduro, we have seen a total collapse of the economy and of the morale of the masses.

With the government campaign putting forward no alternative to respond to the needs of the working class in this deep economic and social crisis, the campaign of Henri Falcón won votes from a discontented and desperate section of the population, but was received with distrust and scepticism by the vast majority.

Reflecting his turn to the right, the Maduro government organised a closing campaign rally on Bolívar Avenue which showed the collapse of his authority among the masses - a low turnout, an apolitical atmosphere, and a crowd that did not even stay to listen to the speech of Maduro. It was also significant that the Maduro leadership has not only eliminated any concrete reference to socialism but also to Chávez's legacy.

The results of the elections speak for themselves. The streets and neighbourhoods of the country expressed themselves with a deafening silence.

Until now Maduro and his government have manoeuvred, resting on the incapacity of the leadership of the MUD to mobilise the social discontent. The only objective they have is to maintain control of the state through a wing of the bureaucracy, isolate the critical left, and negotiate with sections of the ruling class to continue in power.

It was pathetic to witness the leaders of the United Socialist Party of Venezuela (PSUV) claiming to be the victors with 68% electoral support - based on the difference in votes between themselves and the opposition candidates - attempting to mask the fact that only 46% of voters participated in the elections. They could not achieve their objective of winning ten million votes, which they argued would be a victory demonstrating the popular support they still enjoy.

In his speech on election night Maduro reaffirmed his political approach during the campaign, leaving behind the ideas and image of Chávez, making constant calls for reconciliation to all sectors, especially to the bosses and right wing. He promised to end the 'economic war' and after making all sorts of promises during the campaign, basically just told the people they needed to suffer in silence, as 'results' would not be seen immediately.

Maduro is making it increasingly clear that the government is seeking to stabilise capitalism based on maintaining a strong state sector controlled by the bureaucracy (and especially by the army high command whose weight in the government is constantly increasing).

Together with this, he is attempting to consolidate a political regime which, in the face of declining support, increasingly persecutes critical sections of Chávez supporters and the revolutionary left.

The government maintains its position at the moment due to measures such as subsistence payments and 'Clap' bags of food sold cheaply to supporters. However, these measures are more and more limited and have no impact in solving the crisis of uncontrolled prices and paralysis of production.

Another factor which has helped the government is the lack of a mass left alternative which is clearly distinguished from the bureaucracy, and with a clear socialist, anti-bureaucratic and anti-capitalist programme. The discontent with Maduro and the bureaucracy has been expressed in a surge in critical voices and forces within the Chavista movement. In the constituent assembly elections last year, and in local elections, many critical candidates stood.

The right wing wants to remobilise its base through the organisation of a so-called 'broad front'. They are on the offensive in certain areas and calling on 'civil society' to lead the protests, diminishing the visibility and role of the right-wing politicians. It will not be easy for the right to rebuild its capacity to mobilise on the streets, but it is not impossible either. The bankrupt policies of the government can create the conditions for it.

It is clear that the activity of the broad front will be combined with foreign intervention, which will continue by other means following the refusal to recognise the elections. Economic aggression and media attacks will increase. There will be no 'social peace' as long as the current crisis continues.

The goal is the economic asphyxiation of the Venezuelan state, which will have a big impact on the population and exacerbate the difficulties of the government to obtain currency, making the imports crisis even worse in relation to medicine, the financing of public companies and public services.

The working class and poor are suffering the highest level of aggression from capitalists and bureaucrats in living memory. The government has been shown incapable of controlling prices, scarcity, or guaranteeing the basic needs of the population, with even wages of state employees not being paid in some cases.

This grave situation, and the increase in protests which it can provoke, could explode into a revolt at any time. If a revolutionary leadership is not built, such a revolt could lead to power falling into the hands of the far right or of sectors of the army officialdom who would accelerate the pro-capitalist and bureaucratic degeneration underway.

The most important immediate task for revolutionaries, working class activists and activists from popular social movements is to build an alternative which unites the most conscious, left-wing sectors of the workers and youth and the critical left sectors within Chavismo to debate and decide on an emergency programme and plan of action.

This must incorporate the demands of the working class against both the right wing and the bureaucrats. Izquierda Revolucionaria believes that we should fight for all political and economic power to pass over to the workers and poor to end the crisis.