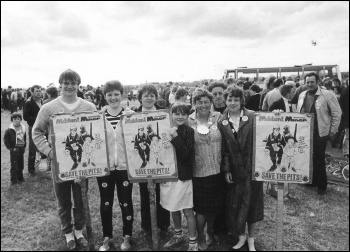 A miners rally in Northumberland during the great strike, photo D Pearson   (Click to enlarge)

Over a hundred former miners lobbied parliament on 6 June, demanding the government stops its decades-long looting of their pension fund.

Billions of pounds are involved. The government milks the fund and doesn't pay out to the miners while waiting for them to die off.

In commenting on the event on Facebook, frustrated workers spoke many truths - including about the lack of action by Labour MPs...

Miner 1: "The miners went through enough with the closure of the pits and the following years of chronic respiratory diseases. Communities and family ruined for generations. Now this. It is so tragic it makes me want to cry with anger."

Miner 2: "Imagine how much angrier you would feel if it was your pension cash [they were] were stealing. My Coal Board pension would be roughly twice what it is now if these Tory vermin hadn't been helping themselves to it.

"We're subsidising their City chums and corporate masters so as they can carry on tax dodging. Richard Branson and Sir Philip Green send their thanks."

Miner 3: "Don't forget... the Labour Party had a chance to put it right. Those MPs who were over the road the other day [when we were lobbying] and had a chance to come over and meet us. They are just as bad as the Tories. They are letting their class down."

Miner 2: "Nothing but a bunch of careerists posing as Labour MPs. Tory Blair's 'New Labour' were just a Tory second eleven - all those MPs who aren't prepared to stand by and defend their class should be... replaced with people who will."

Miner 4: "It was maddening enough to find out the Tories and top-level management of British Coal had planned, schemed, connived and put into place all this. But then Blair and Brown from Labour just carried on doing the same. Makes me so mad."

Miner 2: "That'll be New Labour though. A sort of Tory-lite."