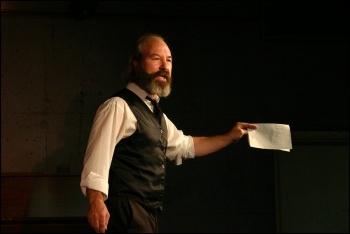 For socialists, a one-man show about Karl Marx might not suggest a night of revelations. But seeing Bob Weick performing Howard Zinn's play 'Marx in Soho' in Manchester on 9 June showed this was a misconception.

Marx has accidentally been returned to Soho, New York - rather than Soho, London, where he requested to go - because of an administrative error in Heaven.

In conversation with the audience, he takes us through some of the events of his life. His exile to London, his daughter Eleanor's precocity (she used to smoke cigars and drink wine), through to writing Capital - and his wife's low opinion of it.

Throughout we are reminded of Marx the person, with his real human relationships. This is the prism through which aspects of his thought are drawn out.

He describes actually wrestling on the floor with Mikhail Bakunin, an anarchist contemporary of his, because of their differences in opinion over the 'dictatorship of the proletariat' - a democratic workers' state that can defend against capitalist restoration.

Marx argues this is a necessary stage in the destruction of both capitalism and the state itself. This is a central difference between Marxists and anarchists, and the point is made here in a memorable way.

Marx's famous statement that he is "not a Marxist" is another key lesson - some would-be followers had turned his ideas into crude dogmas. Marxism is a tool for changing the world, and should be seen not as a theory to be endlessly argued over in the abstract, but a set of ideas to be fully worked out in practice through class struggle.

This seems to be the main message: that Marx should not be idolised - he was a human being with human foibles - but neither should we let his personal circumstances detract from the importance of his thought.

He talks at length about suffering from painful boils on his backside. Some mainstream historians, through cod psychoanalysis, like to suggest this was the root cause of Marx's revolutionary fervour. Anything other than acknowledge it was his experience of the capitalist system.

The play ends with Marx on his soap box, making a rousing speech about the importance of uniting workers across national borders. This struck a chord with the recent rise in refugees and the need to counteract divisive nationalism fostered by demagogues like Trump.

The last words point to this ongoing relevance: "Jesus couldn't make it - but Marx did."

Caerphilly and RCT Socialist Party: What is Marxism?