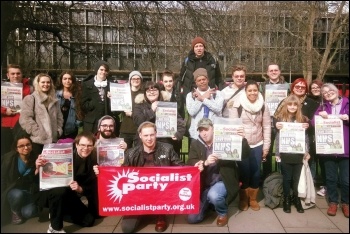 The political scene could change at any time. We should be prepared for another snap general election within this year.

Over 50 people attended, with 73 in Cardiff the following week. Some were current branch organisers but many were newer members wanting to take on more responsibility within their branches.

Throughout the day, there were discussions on topics such as 'how to intervene in and lead a local campaign' and 'the role of the revolutionary party today'. Events like this are giving branch organisers an opportunity to educate themselves and discuss with one another.

It is important to sometimes step back from the day-to-day activities of campaigns we are involved in to have a look at the bigger picture, and improve our understanding of the fundamentals of what our party believes in.

With this new understanding we should then go back to these campaigns reinforced in our understanding of what needs to be done, and how to take things forward.

It is essential to have schools like this in order to build our party both in numbers, but particularly in strength, by making sure our members are preparing themselves to be ready to lead when mass struggle breaks out.

Ask your regional Socialist Party organiser for details of the next meeting in this series.