For a tenants' ballot and mass building of council homes 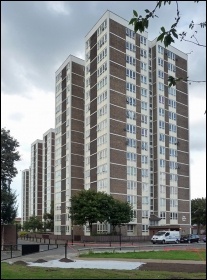 200 families have been ordered to leave their homes on estates in Tottenham, north London, by October. This has come as a complete shock to residents.

The vast majority are council tenants. The borough council, Haringey, has told them they will be rehoused temporarily, but with no mention of where or for how long. Furthermore the council has told them it will offer one option only - and if they refuse to move, the heating and hot water will be shut down.

This is nothing short of scandalous. Tenants' leader Jacob Secker described the actions of Haringey council as "treating residents of these two blocks in a callous and incompetent manner," as if they were "second-class citizens."

Safety issues only emerged in tests carried out post-Grenfell. They showed that design faults could lead to collapse in the event of a fire or a gas explosion.

A further 554 similar blocks nationally could be at risk as they share the same design. That figure could rise by a further 1,000 according to researcher Hannah Brack.

Haringey Council claims not to have known. But this is contradicted by two independent experts who examined the blocks as far back as 1985, an architect and a fire safety consultant.

The consultant is quoted in the Guardian stating that "the structural flaws were there from the day it was built, but the gas made it more likely that if there was a fault with an appliance there would be a catastrophic collapse."

This has all the hallmarks of Grenfell: working class lives put at risk to minimise costs. Tenants have known of problems for years, and so has the council. But it did nothing.

Instead they ran estates down, then claimed they needed demolishing - and that the only viable option was replacing them with expensive new private developments, with only a few homes affordable for former residents. In other words: social cleansing.

This issue will be a huge political test for Haringey Council. At the May elections, a right-wing Labour administration was replaced with the first 'Corbynista council' - as a result of a rebellion in the local Labour Party specifically over the question of housing.

In this context, it is entirely understandable that residents are suspicious of any attempt to move them out of the area. There is the risk they may not be able to return.

One option would be to make the current buildings safe. It appears the council is unwilling to cough up the £28 million this might cost.

Local residents have called for an independent report into whether the buildings could be made safe or not. The council should pay for this, and not make any decision prior to it.

If tenants do agree to temporary rehousing, the council should support their demands and ensure they all have the right to return with secure tenancies, whether the existing buildings are made safe or new homes built in their place. They must remain as council housing.

The residents' association has called for a tenants' ballot on the question of whether the blocks should be pulled down and rebuilt. It is essential that the council agrees to act on the outcome of the ballot.

It is equally essential that the council urgently commences a mass council house building project. This can not only satisfy the demands of any tenants who have to be temporarily decanted, but also the thousands of homeless families in Haringey, as well as those that live in unsafe and shoddy private accommodation.

This was a central demand raised by the Trade Unionist and Socialist Coalition (TUSC) in the local elections. Now it is more urgent than ever that we fight to implement it.