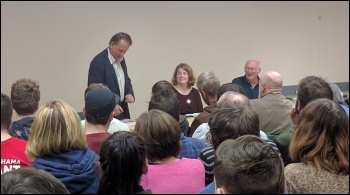 Michael Crick, journalist for Channel 4 news and author of a book on Militant (now the Socialist Party), has attacked what he says are "two Labour figures in charge of Labour Party discipline," Gordon Nardell and Jennie Formby.

He castigates them for having been "part of a secretive and dishonest Trotskyist organisation," Militant, in the past.

These two individuals can answer for themselves over any past political association with us. Militant was a powerful influence throughout the Labour Party in the 1980s, and attracted tens of thousands to our political banner.

We successfully provided the strategy and tactics for the defeat of Thatcher in the epic Liverpool Council struggle, and her further defeat over the poll tax.

But it is completely false and outrageous for Crick to suggest that we were "dishonest and secretive." We openly declared our programme and never denied that we were organised.

Our real 'crime', in the eyes of the right wing of the Labour Party, was that we were better organised than them. They could not defeat us politically, so resorted to the most underhand, undemocratic methods to purge us from the Labour Party.

One of those anti-Militant hatchet men was Tom Sawyer, a renegade 'left', who famously declared in the middle of a witch-hunt: "I defy anyone to tell me how you can go to Liverpool and defeat Militant by argument."

Moreover, Michael Crick remains completely silent over his own role in the undemocratic, underhand methods of the right in trying to politically defeat Militant. For instance, he admitted at a debate with me at Socialism 2016 that he had sent a spy into our Swansea organisation to gather information on us to be used in the witch-hunt.

Now he is acting as a finger-man for the Blairite right to once more undermine the left and thereby Jeremy Corbyn by drawing attention to past political associations and giving them a sinister connotation.

However, he does not behave in an even-handed manner towards the right. For instance, John Mann, right-wing Labour MP and bitter opponent of Militant, admitted on BBC Question Time that he had met former North Korean leader Kim Il-Sung, the present North Korean leader's father.

The Evening Standard commented that the "normally unruffled David Dimbleby was... taken aback by the news." Mann's answer to Dimbleby's question, "how did you meet him," was: "Erm, it was at a conference... You know. No one was talking to me, and no one was talking to him... So I went and had a word with him."

Why no media denunciation of Mann, for his past support for a dictatorial Stalinist leader? On the contrary, the Evening Standard, which reported the story, just comments: "Perhaps the meeting dates back to Mann's time as leader of the National Organisation of Labour Students" attacking "Labour's Militant tendency during the 1980s."

And this was "certainly the time when left-wing activists could find themselves being invited on jollies east of the Iron Curtain." So Mann was associated with Stalinist bureaucrats! But this does not call forth denunciations of him by the press and media cabal.

Michael Crick is two-faced. He can admit on BBC Radio 4 that Militant was "brilliantly organised, brilliant orators. They plan things, know what they're doing and they keep at it.

He is telling the truth here, which completely contradicts his failed attempt to discredit our ideas and methods. "Dishonest" applies to the bosses - not to Militant, or the Socialist Party today.