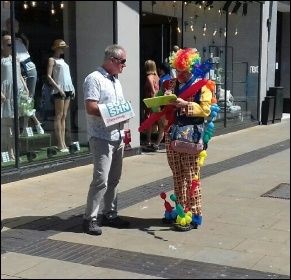 The NHS crisis is no joke. Over-stretched A&Es are like circuses. This worker signing a petition with Swansea Socialist Party isn't clowning around. He knows only a socialist programme can save NHS workers juggling patient care with intolerable cuts.