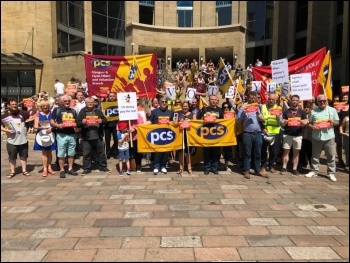 On 22 May the PCS civil servants' union conference voted for a statutory pay strike ballot of members covered by Treasury pay restrictions - the pay cap.

Seemingly in response to this strike threat the Treasury offered to talk to the unions about the pay instruction it was issuing for 2018-19.

Now, a month after the conference decision and various talks with the unions, the Treasury has put out its 'civil service pay guidance' for 2018-19. Disappointingly, but perhaps unsurprisingly, the pay cap is still firmly in place.

To quote from the 'guidance': "This year government departments will be able to make average pay awards within the new range of 1-1.5%".

Rather unhelpfully the Treasury say some individuals can be paid more than this limit but only if others are paid less.

The message this sends to PCS members is clear. Only by voting Yes in the ballot (closes 23 July) for strike action will the Treasury take notice.

In local government and health, limited concessions above the pay cap have been made. PCS members employed by the Scottish government have secured a 4% pay deal and PCS members in Highways England have accepted a 3-10% pay deal against a background of huge recruitment difficulties caused by the government's attacks on public service pay.

With inflation over 3% in May 2018 the Treasury pay limit for 2018-19 is, in effect, a further cut in the real wage levels of PCS members. This comes on top of a decade of pay restrictions and a real terms cut in pay.

No matter which way it's looked at, the Treasury pay guidance is a pay cap and another year of pay misery. It's unacceptable and is a clear message to PCS members: vote Yes in the strike ballot.

Massive efforts have been put in across South Yorkshire to raise the profile of the PCS pay campaign among the 6,000 civil servants in the region.

The focus is on delivering the 50% turnout for the ballot to be deemed legal.

Pay day protests have been organised outside government offices and thousands of leaflets have been issued with the big offices being leafleted weekly. As well as leafleting there have been sticker day campaigns to promote discussions between members in the offices, with members encouraged to take stickers and ask others to wear them. Weekly leafleting is being planned throughout the ballot period with a realisation and confidence the unprecedented 50% turnout will be achieved if we keep campaigning, and we keep asking members: have you voted in the postal ballot?