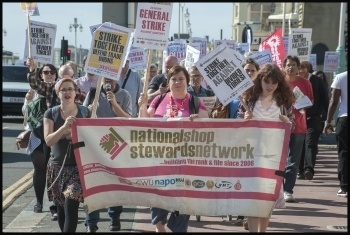 The first National Shop Stewards Network (NSSN) meeting in Harrogate took place on 27 June, bringing together local trade unionists in dispute against the effects of austerity.

Johnathan Leng, from Harrogate College University and College Union (UCU), opened the discussion about their recent dispute over cuts at the college. UCU members had taken three days of strike action to fight these attacks.

Adrian O'Malley, Unison service group executive member for Yorkshire and secretary of Mid Yorkshire Unison branch, speaking in a personal capacity, outlined the battle against the formation of 'wholly owned subsidiaries' - a step towards privatisation - in a number of hospital trusts across Yorkshire. Adrian's branch was one of four which recently organised a coordinated ballot for strike action. Mid Yorkshire Unison recorded a 58% turnout with a thumping majority for strike action, the looming threat of which has forced their trust to offer potentially significant concessions.

The local RMT rep gave his apologies - he had been due to speak about the dispute over the introduction of driver-only operation by Northern Rail.

A lively discussion was had, including the need for more communication between trade union branches and activists in the town. One suggestion was for people to subscribe to the NSSN's weekly bulletin which contains news of trade union campaigns and disputes across the country. You can subscribe at shopstewards.net.