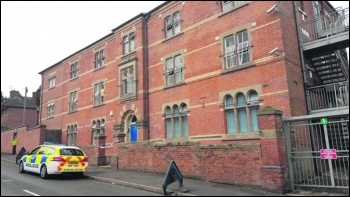 Call to police: "We need urgent assistance, a resident is outside, being extremely abusive and banging on the windows." Is anyone being physically attacked? "Not yet." Then you are not a priority.

No police arrive, despite this resident being recalled to prison for his abusive behaviour that morning.

Previously, all staff would need to do would be to pull their personal alarms and the police would be there in two minutes. Now an agency rings back and asks if the police are really required to attend.

A violent offender fails to return to hostel for curfew. Procedures mean we must verify if the resident is in hospital or has been arrested before he can be recalled to prison for missing his curfew.

We stay on the phone for ages but neither the police nor the NHS are answering. They are stretched to the limit too.

Probation hostels have several roles, rehabilitation of offenders and protecting the public are the main ones.

We work with some of the most violent criminals. Yet our pay has not gone up since 2008. Its £10.30 an hour plus shift allowances. I believe I could earn more working in a supermarket.

In addition, since the rest of the probation service was privatised, we have lost allowances. Before then, if we worked a nightshift on a bank holiday, we would be paid the nightshift allowance and the bank holiday allowance. Now we only get one of those allowances.

The hostels were not an attractive proposition for privatisation but it is widely believed by staff that recent changes were made in preparation for it. They don't make sense otherwise.

Long-standing, experienced staff (and trust me, you need experience in this job) have been transferred to other roles. New members of staff are paid less.

They have totally inadequate training, done on the cheap, before they are considered 'trained' to know what to do in a variety of scenarios where staff or the public might be at risk.

There are two hostel workers at night. We need to rely on each other for our own safety.

Yet one member of staff each night is supplied by an agency, Sodexo, appointed sometimes on the strength of a telephone interview.

Shift patterns have changed without seemingly any thought to the impact on working practices. Staff morale is low.

We have previously been very proud of the service we provide to offenders in helping them in their transition from prison.

And to the public in monitoring resident behaviour and being alert to signs that they may be likely to reoffend.

The deterioration in the service, working conditions and pay have been brought about with barely a whimper from the unions concerned (Unison and Napo).

But the anger is simmering and palpable. We fear that it is only a matter of time before something goes badly wrong.