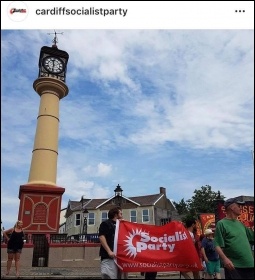 121 copies of the Socialist was sold on the march and rally in Tredegar (Aneurin Bevan's hometown), south Wales on 1 July to commemorate the founding of the NHS. 1,000 people rallied to hear speeches from leading Welsh Labour politicians.

The speakers denounced Tory attacks on the NHS in England but unsurprisingly glossed over the cuts to NHS provision in Wales. "After listening to them you would think they were talking about a different country", was the comment of one marcher.

Labour health minister Vaughan Gething was heckled by a person at the rally: "You try walking 20 miles to visit someone in hospital on a Sunday", a reference to Welsh Labour's health cuts and lack of transport.

Unfortunately Jeremy Corbyn also extolled the NHS in Wales. This will not help him win the support of workers in Wales who are angry at health cuts and A&E closures.