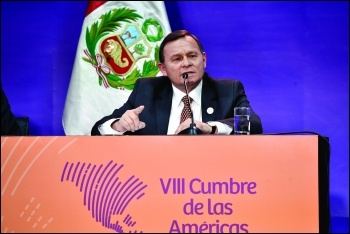 Workers in Peru are suffering an appalling attack by the neoliberal government. CAS workers - workers hired under a precarious 'Service Administration Contract' (Contrato de Servicios Administrativos, CAS) - are being laid off in large numbers by the government headed by new president Martin Vizcarra.

He has been helped by the infamous right-wing 'Fujimorista' party - nicknamed after Alberto Fujimori, the former president who had to leave the country under accusations of corruption and brutal attacks and killings of working class people, political activists and trade unionists.

The CAS targets workers in the education system, EsSalud (the Peruvian national health service) and other public sector workplaces.

It means that these workers are hired on temporary contracts (sometimes for only three months), without access to career progression, bonuses, overtime, holiday pay, workers compensation, etc.

They are paid significantly less than workers integrated into the public sector - sometimes only half the pay for the same job.

More than 275,000 public sector workers have been hired under this contract, representing almost a quarter of the workforce.

The fact that their contracts have not been renewed - which, in practice, means they have been fired - is a clear attack on the working class, and a pushback by the right wing government on the earlier victories won by these workers.

The government claims that there is not enough money in the public coffers at the same time as ex-presidents and congressmen are under scrutiny and investigation for corruption and misuse of public funds!

After intense mobilisations by CAS workers, especially in EsSalude and in schools, Congress was forced to concede.

It passed a law eliminating CAS contracts and integrating workers into the public sector. However, this was negated by the neoliberal government with massive lay-offs of CAS workers.

But the working class has responded. Teachers under the CAS regime called a nationwide strike on 28 June, and a rank-and-file movement in EsSalude, called 'CAS nunca mas' (CAS never again), is organising against the arbitrary lay-offs and precarious contracts and for an increase in the EsSalude budget.