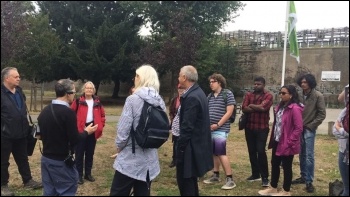 18 people met on a slightly rainy Sunday afternoon for a political walk - 'Revolt and Rebellion' - through west London. It started at Turnham Green with a speech on the English civil war, and ended at the venue of the Putney debates.

We went past William Morris' old home. Morris, who spent most of his life in Walthamstow in east London, moved to Hammersmith near the end of his life where he further developed his socialist ideas.

As we passed Fulham's football stadium we were taken back in time to the beginning of World War One and the debate that had taken place around whether the football season should continue during the war or be cancelled. We also heard about the famous football match that took place in no-man's land over Christmas in 1914.

We raised fighting fund and met some new people interested in the Socialist Party. It was a great initiative which we will hopefully repeat in the future.