Trump ally prosecutions: beginning of the end for US president?

Trump and his allies continue to expose themselves as the self-interested capitalists they are - not 'anti-establishment' in the slightest.

These rulings are particularly important to the Trump administration as they could mean his election campaign itself also broke the law. It has triggered fresh calls for Congress to begin impeaching the already-weak president - although the Democratic Party, itself no friend of workers, has resisted calls for this so far.

Already, a number of his influential supporters are jumping ship. Some now say they will cooperate with former FBI director Robert Mueller's investigation into claims of Russian collusion with Trump's campaign.

Trump was never the chosen candidate of US capitalism. It was his popularity among a section of voters - compared to business-as-usual Republican (and Democratic) candidates - that allowed Trump to win the Republican Party nomination, and enough electoral college votes to defeat the pro-Wall Street Hillary Clinton.

Up till now, the bosses have been biding their time before tackling Trump's more destabilising policies head-on - while counting their blessings when it comes to cuts in corporation tax, for example.

Ever since Trump's election, the Socialist Party's co-thinkers in the US, like Seattle councillor Kshama Sawant, have raised the need to build a mass movement capable of driving out this rotten, racist, sexist, anti-worker administration. There have been huge protests in the US along with solidarity actions around the world, which have helped force back Trump's government on a number of policies. 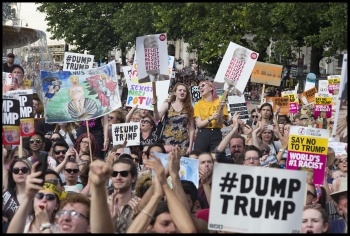 If a mass movement does force Trump out, then whoever replaces him, however vile politically, would face even more complications when attacking working people than Trump has - not least the fear of both establishment parties or further movements from an emboldened working class. It would be a huge show of strength by ordinary people of their ability to change US society in their interests.

With such an apparently easy target, there could be the expectation that the Democrats will have an easy midterm congressional election. Understandably, many ordinary people in the US will look to the Democratic Party, believing it provides the only viable way to get rid of Trump. Some may also believe that 'moderate' - meaning conservative - candidates must be selected to win back seats from Republicans.

Yet it's pro-worker policies that revitalised millions of people in the US to support Bernie Sanders during the presidential primaries two years ago, and which continue to be the most popular: universal healthcare and a $15-an-hour minimum wage, among others.

It was policies like these that helped Alexandria Ocasio-Cortez, who calls herself a "democratic socialist," win a Democratic congressional nomination in New York. If the Democratic Party ran on such policies, it would fare much better than in 2016.

But her win is the exception rather than the rule. The majority of voters will be offered two similar establishment candidates in November's midterm elections.

And unfortunately, even Ocasio-Cortez has since tweeted that the late Republican senator "John McCain's legacy represents an unparalleled example of human decency and American service." This shows she is not consistent in opposition to the political representatives of capitalism.

If the Democratic Party makes gains in the midterms despite its programme, the talk of impeaching Trump could grow, as the two-thirds majority needed in the Senate may look more possible. The establishment will continue to grope for a replacement candidate who can represent the ruling class's interests reliably.

But some sections of workers in the US - especially those hostile to the 'Washington swamp' and taken in by Trump's claims that he is on their side - could see impeachment as an establishment attack on an 'anti-establishment' figure, because of Trump's populist posing.

So rather than fighting only for impeachment or the replacement of one capitalist politician with another, the most important task for socialists is building a viable mass movement - ultimately, a new party - against racism, sexism and capitalism. Such a movement will need to force out Trump and the Republicans, but also have no time for the big business establishment in the Democrats.

A movement from below, built on fighting for pro-working class demands - like the recent US teachers' strike wave - can pull together ordinary people across the US left behind by a decade of economic crisis, for a real socialist alternative to capitalism.