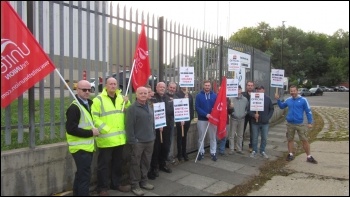 Liebherr strikers on their Sunderland picket line on 24 August were resolute. Talking about the importance of their picket line - which is highly successful in turning away deliveries to the company - one of the strikers commented: "Even if it's thunder and lightning, we'll be standing here." Their placards state: "Liebherr - no cranes today".

Both Unite the Union and GMB members are out on strike to improve their pay. Workers at Liebherr produce high-quality marine cranes.

The company is global, and their Sunderland plant is profitable. Internationally, the company boasted of almost €10 billion turnover last year.

One of the strikers pointed out that, according to Liebherr's company accounts, one of the directors at the Sunderland site received an annual salary of £151,000 - that's around £3,000 a week!

Over the coming weeks Liebherr workers are intensifying their strike action. There is also an overtime ban in place. There is clearly a mood to further escalate the action if management fail to improve their offer.