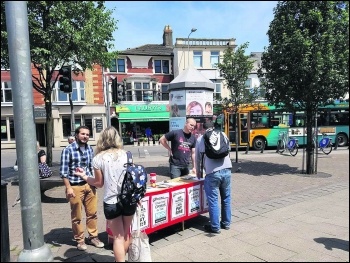 The Socialist sales drive we launched to mark the 1000th issue of the paper smashed through the target we set ourselves of 1,000 extra sales. We want to build on the success of this campaign by launching a new sales drive for issue 1011 at the end of September. Beth Webster, of Cardiff West Socialist Party, reports on success selling the Socialist in her branch.

Selling issue 1000 of the Socialist was a roaring success in Cardiff, showing the appeal of socialist ideas to working class Cardiffians. In that week, Cardiff West branch more than doubled our usual sales, buoying them ever since.

We sell the most papers on stalls campaigning to prevent NHS cuts. Some people, though sympathetic to our ideas, doubt the power of ordinary people to make significant change, so it's invaluable to be able to open up a paper and show them successful campaigns we have led and participated in. The prevention of the Chatsworth neuro-rehabilitation ward closure is a great example.

Sometimes people passing only need a brief glimpse of a 'Tories Out' headline before shouting their agreement and coming to talk to us more.

We have also been campaigning on the escalating housing crisis, with 3,000 empty homes in Cardiff and homelessness very visibly on the rise. We recently sold five copies of the Socialist at a local housing development meeting. Despite it being held to air residents' concerns, rather than being a political meeting, people were attracted to our programme of jobs and housing.

We also encourage both current and potential Socialist Party members to read the paper to help with understanding our ideas by pointing out relevant articles in meetings. A young reader said she liked our paper because, instead of the jargon mainstream papers use to obscure political and economic issues, alienating most ordinary people, our paper is clear and down to earth.

Ours is the only paper reporting the battles and successes of the working class, encouraging working class people to see their potential to effect real change.

Cardiff Socialist Party: Tories out! Corbyn in with socialist policies