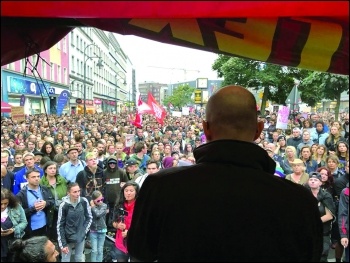 The 27 August pictures from Chemnitz, in the German state of Saxony, were shocking: over 5,000 far-right protesters moving through the city centre.

Some of the crowd beat migrants, throw bottles at counter-demonstrators, and attack journalists. The police appear unwilling or unable to stop the Nazi assaults...

These events had an enormous impact nationally. Reports of the 'pogrom atmosphere' in Chemnitz spurred anti-racist protests and solidarity actions in other cities.

On 30 August, in Berlin, around 10,000 took part in an anti-far-right demonstration initiated, at two days' notice, by Sozialistische Alternative.

Then 65,000 came to the 3 September "wir sind mehr" ("we are more") anti-racist and anti-far-right concert in Chemnitz.

The size of this event, far bigger than anything the far right or fascists have been able to mobilise on the streets, showed the potential for building a counter-movement.

The question that is sharply posed now is exactly how to combat racism, the growing far right and the increasingly confident neo-Nazi groupings.

This is not just a question in eastern Germany. Currently polls are showing increasing support for the right-wing Alternative for Germany (AfD) party - that, nationally, could be overtaking the Social Democrats (SPD) as Germany's second most popular party.

The initial trigger for the 27 August protests was the tragic death, in the early hours of the previous Sunday, of 35-year-old Daniel H at a Chemnitz festival.

The background is still unclear although a Syrian and an Iraqi have been arrested for his killing.

At first the fight that led to Daniel H's death was described as a dispute over 'assaults' against several women.

But this account appears to come from the realm of fantasy. While the Bild newspaper, in particular, eagerly spread the tale of an assault on German women which three Germans tried to prevent, the police strongly disagreed with this version of events.

Seizing an opportunity, Nazi groups - such as 'Kaotic Chemnitz' and 'NS Boys' - and also the racist AfD, immediately called for demonstrations that Sunday.

Around 1,000 people came to that protest, which soon saw migrants and anti-fascists being attacked. Many were chased down streets while the attackers were largely unhindered by the police.

The following day, more than 5,000 far-right protestors rallied again in Chemnitz, some of whom had been mobilised nationally to attend.

It is not credible to simply argue that Daniel H's death led to these completely out-of-control, far-right demonstrations.

Even Saxony's minister of the interior, Roland Wöller - from the right-wing CDU party - had to admit that the far right's use of violence had reached a new level.

Since October 2014, the racist 'Pegida' movement has been regularly on the streets of Dresden, Saxony's state capital.

This has changed Saxony, even if the Pegida marches currently mobilise only a fraction of the people they did at the beginning.

Far-right groups were given a tailwind and felt encouraged by growing support. As Franziska Schreiber, former regional chair of the AfD's youth organisation Junge Alternative (JA), notes in her recently published book, both the JA and AfD recruited new supporters at the Dresden Pegida demonstrations.

The subsequent AfD electoral success, along with racist speeches and statements, gave the right-wing activists an additional boost.

A few weeks ago, an employee of the regional police agency LKA taking part in a Pegida demonstration in Dresden against a visit of the German chancellor Angela Merkel got the police to obstruct a news team from the public television service ZDF filming the protest.

This off-duty LKA employee was filmed shouting the Pegida slogan "Lügenpresse" ("lying press") before the police held the ZDF camera team for 45 minutes.

This incident shows the extent to which the Saxon state apparatus seems to have been infiltrated by far-right thugs and racists.

Above all, these events show one thing: we can only win the fight against racists, Nazis, right-wing populists and the 'Reichsbürger' (a movement arguing that the pre-war German state still exists within its 1937 borders) by fighting back together in a mass, united, working class struggle.

Furthermore, the state apparatus cannot be relied upon to provide a defence against these forces. Anyone who wants to stop the far right and the Nazis must become active.

Taking to the streets can be a first step, but action must also be taken in workplaces, communities, schools and universities.

This has to include uniting and organising collective resistance, including providing defence against Nazi and racist violence especially given the police's record of failure on this.

Saxony's minister of the interior emphasises his support for the police. But Heidenau, Bautzen, Freital and Colditz are all Saxon towns known for racist assaults. Burning asylum seekers' hostels, violent attacks - the list is long and frightening.

In none of these examples did the police play a glorious or heroic role. In fact the far-right thugs were often tolerated, as was initially the case with the now jailed neo-Nazi Freital terrorist group.

At the same time there were huge police mobilisations against left-wing counter-protests.

Countering the gains of the AfD requires building a mass working class alternative armed with a socialist programme of demands.

This is especially so in eastern Germany where Die Linke (the Left Party) is seen as part of the establishment - making it easier for the AfD to grow.

But the AfD, which has both neoliberal and more populist wings, has no answer to the increasing poverty or the bosses' drive to hold down wages.

For example, according to its co-chairs, Jörg Meuthen and Alice Weidel, the AfD wants to base pensions solely on private finance.

Weidel is a member of the neoliberal Hayek Society, which has set itself the goal of 'freeing' large companies from any social restrictions.

But, more than that, elements within the AfD cheered on the Chemnitz protests and, by implication, attacks on migrants.

One AfD member of the Bundestag (parliament), Markus Frohnmaier, tweeted: "If the state is no longer to protect citizens then people take to the streets and protect themselves.

"It's as simple as that! Today it's a citizen's duty to stop the lethal 'knife migration'!"

Another AfD Bundestag member, Udo Hemmelgarn, reportedly sympathetic to the Reichsbürger, tweeted after the clashes: "The problem isn't the peaceful protests by the brave people of Chemnitz against criminal Muslim migrants, it is the rapes and murders by illegal immigrants - migrant violence!"

Saturday 1 September saw rival mobilisations in Chemnitz. While the joint far-right march was bigger than the counter-protest, it was not massively larger than on the previous Monday.

However, unfortunately this counter-protest was politically dominated by representatives of the pro-capitalist parties whose policies over the last decades have paved the way for the growth of the far right.

The pro-cuts policies of the SPD and Green leaders will not undermine the mass base that the AfD currently has in Saxony.

The size of Monday's "we are more" concert showed the potential for mobilising young people. Its size enraged the far right.

Beatrix von Storch, vice chair of the AfD Bundestag members, angrily tweeted after the concert: "You are not more. You are Merkel's subjects, you are odious - and you dance on graves".

The challenge is to mobilise this potential for fighting back. Both Die Linke and the trade unions have a particular responsibility.

The key to reversing this situation is not only protests but primarily building a movement that builds defence against racist and fascist attacks, fights to win social improvements now and offers a real alternative to capitalism.

Such a genuinely socialist alternative would undermine the AfD's support and isolate the fascists.

Sozialistische Alternative points out that the last word in this battle against the right has not been said.

If the trade unions, Die Linke and social movements are mobilised in the fight against racism, presenting a real socialist alternative, supporting the peaceful coexistence of all working class people, then great things could be achieved.

The fight against racism must be linked to the struggle for more care workers, for better schools, for secure, well-paid work, and so on.

It is crucial to build on the common social interests of all working people regardless of skin colour, nationality or religious affiliation.

For example, tenants born in Germany can understand best that they have exactly the same interests as the family who fled Syria when they are engaged in a common struggle to end high rents.

This is the way to undermine the support the AfD currently has. Racism divides, which means it weakens us. Solidarity helps us to win.

But this also means that the trade unions and Die Linke must finally take an active part in the struggle against the far right.