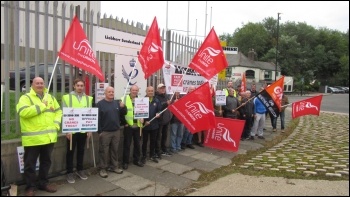 Members of general unions Unite and GMB working for Liebherr in Sunderland are striking to improve their hourly rate of pay.

The strikers took eight days of industrial action in August and are walking out for eight more in early September.

For a number of years Liebherr, which is a global company, has promised to improve pay once the company is doing better.

So when workers saw Liebherr's boast of a record-breaking global turnover in 2017 of almost €10 billion, they felt the company should come good with their 'jam tomorrow' promises.

Managers have clearly been attempting to intimidate the workers on the picket line by taking photos of the strikers.

So strikers decided to have a bit of fun! They set up music through their megaphone. Once the managers (having again taken photos) began to walk away, the strikers played the theme tune from comedy duo Laurel and Hardy. One of the managers was livid!

The strikers are having a lot of success stopping deliveries to the company. This has included the postal worker and milkman, who both refused to cross the picket line.