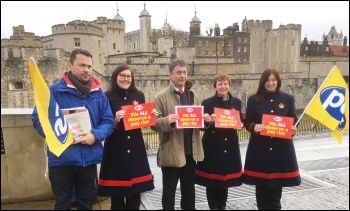 He is seeking nomination as a candidate for re-election to this position within PCS Left Unity, the union's broad left organisation.

Here, Chris speaks to the Socialist in a personal capacity about the challenges currently facing the PCS, the trade union and labour movement more widely, and about the way forward in the struggle against austerity.

The mainstream media tell us trade unions are out of date. With a further fall in the recorded membership of unions and historically low strike figures, is there some truth in that position?

These figures disguise the fact that the need for unions is as strong now as it has ever been. The scale of insecurity of employment in non-union areas has grown massively from the Thatcher government onwards.

But if unions fight, they can attract a new generation of workers, who are often super-exploited. There have been some notable disputes such as McDonald's, TGI Friday's, and now cleaners working in the Ministry of Justice (MOJ) that our members there are supporting.

There has also been action against bogus self-employment. It remains a provable fact that workers in unionised workplaces have better pay, terms, and conditions.

I have played a leading role in negotiating a national apprenticeship agreement which means that a new intake into the civil service will benefit from trade union-secured protections.

Because of the Tory anti-union laws, despite a huge yes vote, PCS can't now go forward with a strike on pay. What faces the union now?

Were it not for the undemocratic anti-union laws, we would now be celebrating a massive strike vote that we could put into practice.

It's a testament to the huge effort of our reps and activists across the whole of the union. And it will be vital to continue to put pressure on a Tory government that has singled out civil servants for extra attacks.

The civil service unions have applied for a judicial review against the government's failure to consult us on the pay guidelines.

But the most important task for PCS is to support campaigns in the MOJ, Department for Work and Pensions, HM Revenue and Customs and any other group in the union challenging the 2018 pay offer.

We welcome the fantastic vote by MOJ members whose employer is seeking to impose a derisory pay rise in return for worse conditions.

We will again be coming to the Trade Union Congress to call on public sector unions to apply coordinated pressure on the Tory government to halt and reverse the decline in workers' pay.

Last year, TUC congress unanimously passed a motion agreeing coordinated ballots and action. That didn't happen so what are the lessons?

The TUC demonstration that took place this May should have happened much earlier to act as a platform for coordinated action.

But instead, yet again the Tories were able to play workers from different sectors off against each other.

While the Tories relaxed the pay cap in some areas, albeit in a very uneven manner, public sector workers and PCS members in particular are still suffering declining living standards.

The lesson is that, as well as calling on the TUC to enact successive congress policies for coordinated action, unions who are serious about a fight need to come together and plan for action in 2019.

That's why we need to talk to the University and College Union who have started a pay ballot and others like the National Education Union who have been discussing it.

As well as pay, there will be other interesting debates at TUC such as Brexit and climate change, about which you have been a longstanding campaigner.

Yes. On Brexit, we have been fighting for extra jobs and resources for the civil service as a result of the Leave vote and the extra work that is involved.

On climate change, there can be no dispute about the science. As we've seen just this year, climate is a trade union issue.

Austerity and the cutting of emergency services such as firefighters have been tragically highlighted.

Trade union pressure is needed in fighting for a just transition from an economy reliant on the burning of fossil fuels to a zero-carbon economy based on public ownership and run in the interests of working people and the vast majority in society.

Fracking has been banned in Wales and Scotland and a number of countries across Europe, yet the Tories have overridden the wishes of local people in areas such as where I'm from on the Fylde, despite the risks to the environment and public health.

This reveals how beholden the Tory government is to big business. There needs to be union support for action against fracking.

Finally, how do unions support Jeremy Corbyn from the attack by the Tory establishment and the Blairites?

Jeremy Corbyn and John McDonnell have been longstanding friends of PCS and supported many of our campaigns and disputes over the years. While PCS isn't affiliated to Labour, we welcomed Jeremy's election as Labour leader.

And we hope that if we can force a general election as soon as possible, the policies in his manifesto that will benefit working people can be implemented, such as renationalisation instead of privatisation and outsourcing.