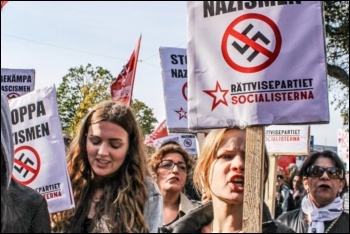 As expected, the racist, far-right 'Sweden Democrats' increased their share of the vote from 12.9% to 17.6% in the country's recent general election. The former fascist party was able to capitalise on the failure of the neoliberal policies of the ruling Social Democrat-led coalition.

Both the Social Democratic Party and the Moderate Party - which heads the conservative opposition coalition - suffered a significant decline in their share of the vote. Both were seen by many voters as remote, elite and clearly part of the establishment - which, of course, they are!

And despite criticising the Sweden Democrats' explicit racism, both the government and the opposition have blocked refugees and promoted nationalism - thereby fuelling the capitalist lie that migrants are to blame for society's problems.

However, while the establishment media highlighted the success of the far right, it barely mentioned the rise in vote for the Left Party from 5.7% to 7.9%.

Rättvisepartiet Socialisterna, the Socialist Party's sister party in Sweden, had mixed results in the municipal elections held at the same time.

They were able to retain two councillors in Luleå in the north. But unfortunately, they lost two seats in Haninge, south Stockholm, by just 70 votes - despite increased support - due to new election rules.

While the main parties in the coming weeks will be squabbling over the spoils of office, Rättvisepartiet Socialisterna will continue to build an anti-racist, anti-austerity workers' movement against capitalism.