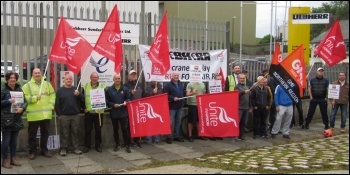 One of the strikers contacted us to thank both the Socialist Party and National Shop Stewards Network for the support we have offered during their recent strike.

He ended by underlining the importance of industrial action, saying: "You must fight... even if you don't win, at least you've tried."

Some bus drivers working for Trent Barton in Nottingham have had to resort to food banks due to low pay.

Unite the Union members at the bus company were out on strike on 10 September opposing a 2.5% pay 'rise' offer which was being imposed by management. Unite officer Scott Lennon told the Socialist that drivers were being forced to work 50 to 60 hours a week to earn a decent wage. Pickets told me that some worked 13 days out of 14.

They were incensed that lies were being told to the media about wage rates. 70% of members voted for the action which will continue every Monday.