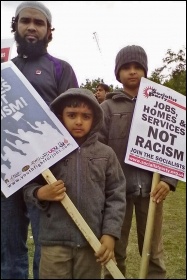 Jobs, homes and services - not racism, photo by Bob Severn   (Click to enlarge)

The EDL billed the day as the 'Battle of Worcester' following an earlier demo on 21 July when its supporters were outnumbered and prevented from marching. But barely 100 followed their call.